4 suspects detained in US consulate attack in Istanbul

There was scepticism among security experts that al Qaeda was behind the assault on the consulate, given the small scale and amateurish nature of the attack. 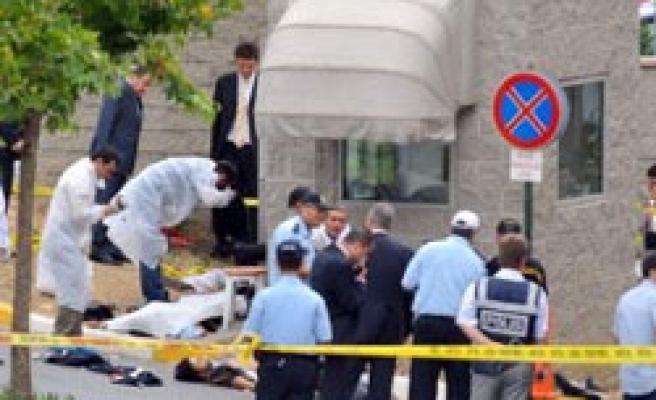 Police detained four suspects and patrolled the high-walled perimeter of the U.S. consulate in Istanbul on Thursday, after a terror attack which in which 3 policemen and 3 gunmen were killed.

Busloads of police were stationed outside the mission, CNN Turk said, and security was tightened at other diplomatic installation. Police manned checkpoints at various point in the sprawling city to check the identity of passing motorists.

Turkish television flashed news of Interior Minister Besir Atalay reporting the detention of four suspects, three of them in Istanbul. There were no immediate details.

The U.S. consulate had already been moved to a more secure location in Istanbul following the September 11, 2001 attacks in New York.

Turkish police were investigating media reports that al Qaeda was behind Wednesday's attacks, and that the gunmen who carried it out had allegedly received weapons training in Afghanistan.

Police were still looking for the fourth man in the squad, who escaped from the scene in a car during the gunbattle between the gunmen and police.

The attack coincides with political tension in Turkey. The governing party is fighting to avoid being banned for alleged anti-secular activities and police are probing a shadowy far-right group suspected of plotting a military coup.

"We saw once more that terror is ruthless, has no religion, faith or nationality. We condemn terrorism from wherever it comes. We will continue the fight against terrorism to the end," the Interior Minister said.

There was scepticism among security experts that al Qaeda was behind the assault on the consulate, given the small scale and amateurish nature of the attack.

In Turkey's eastern Igdir province, friends and relatives of one of the dead gunmen, named as Bulent Cinar, expressed shock at his involvement, the state-run Anatolian news agency said.

"Bulent was a good boy. We were shocked when we heard what happened. I can't understand how he could do such a thing. He was definitely deceived," said Erhan Karaboga, a friend of his.