"Dr. King was like Moses. Dr. King was sent here to lead us to a better way." said a King follower. 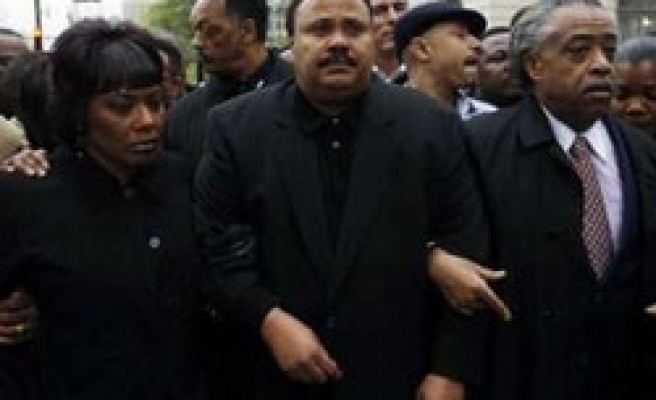 White-haired veterans of the sanitation workers' strike that brought the Rev. Martin Luther King Jr. to Memphis in 1968 marked the 40th anniversary Friday of his assassination by marching to the motel where he was cut down by a sniper's bullet.

"Dr. King was like Moses," said Leslie Moore, 61, who was a sanitation worker in 1968 and is still on the job more than a generation later. God gave Moses the assignment to lead the children of Israel across the Red Sea. He sent Dr. King here to lead us to a better way."

The morning rally _ which included a dozen or so of the original strikers, along with hundreds of other people, mostly members of AFSCME, the public employees union _ was one of two marches to the Lorraine Motel, once a blacks-only establishment in segregated Memphis, now a civil rights museum.

In the afternoon, about 800 people made their way through the streets in the rain, wearing bright slickers and carrying umbrellas. The crowd was mostly black but included people of all colors and stations, a display of the kind of unity King once dreamed of and found so tragically elusive in the violence-drenched spring of 1968.

"I was too young to be a part of the struggle," said union member Sherl Commodore, 50, of Baltimore. But to be able to come here 40 years later is awesome."

Baxter Leach, 68, a retired sanitation worker, took part in the strike, which marked the beginning of the end for white domination of government and civic affairs in Memphis. Before the walkout, black sanitation workers labored long hours for little pay and could be fired at the whim of white bosses. They eventually won union representation.

'HE WAS FOR ALL COLORS'

"We honor this day. We march," Leach said, adding that King helped all Americans. He was for poor folks. He wasn't for just one color. He was for all colors."

Youth counselor Joe Beavers said he and forensic scientist Cassandra Franklin, a black couple from Nashville, wanted to teach their daughter that King was one of the people who made it easier for her to grow up in a society where we can be colorblind."

The National Civil Rights Museum opened in 1991 at the Lorraine Motel, which now holds exhibits tracing the history of America's struggle for equal rights. The museum also encompasses the flophouse across the street from which James Earl Ray, a white man, fired the bullet that killed King as he stood on a balcony at the motel. Ray died in prison in 1998.

King and his movement were under siege when he came to Memphis in 1968. The strike in Memphis had descended into violence. King's opposition to the Vietnam War had alienated friends like President Lyndon Johnson. The FBI had wiretapped him, and foes of integration reviled him.

This week, the president and presidential contenders Hillary Rodham Clinton, Barack Obama and John McCain honored King, as did lions of the civil rights movement.

"The world still listens to Martin," said C.T. Vivian, who helped organize lunch-counter sit-ins in Nashville in 1960 and fought for voting rights in Selma, Alabama. There are people who didn't reach for him then who reach for him now. They want to know this man. What did he say? What did he think?"

Obama decided against a personal pilgrimage to the city of King's death. He campaigned instead in Indiana, where he said King's dream has yet to be realized fully.

Ethel Kennedy was scheduled to speak at an evening ceremony at what is now Martin Luther King Jr. Park in Indianapolis. Her late husband, Robert Kennedy, gave a passionate speech there the night of King's assassination that was credited with quelling violence in the city.

In Atlanta, Bernice King and Martin Luther King III placed a wreath at the national historic site where their father and their mother, Coretta Scott King, are buried. They went to Memphis later in the day.

BUSH: WE MADE PROGRESS ON DR. KING'S DREAM

President Bush said in a statement that 40 years ago, America was robbed of one of history's most consequential advocates for equality and civil rights. ... We have made progress on Dr. King's dream, yet the struggle is not over."

In Memphis, speakers urged the crowd to follow King's example by working to help the poor, improve public schools and provide housing for the homeless.

Willie Herenton told the crowd he remembered marching with the sanitation workers in 1968 and protesting city policies. He is now the city's first black mayor.

I never dreamed that one day I would come from a protester against the mayor to enter City Hall as the mayor," Herenton said.