Delegates to a conference on Iraq in Egypt's Sharm el-Sheikh resort town have overwhelmingly adopted a five year plan aimed at stabilising Iraq and pledged $30bn of debt reduction. 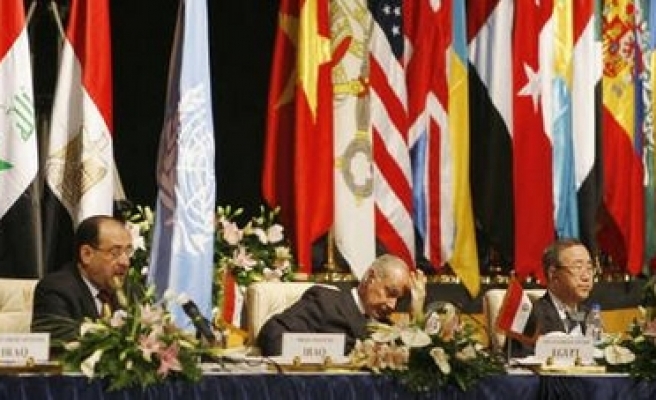 Delegates to a conference on Iraq in Egypt's Sharm el-Sheikh resort town have overwhelmingly adopted a five year plan aimed at stabilising Iraq and pledged $30bn of debt reduction.

In announcing the agreement on Thursday, Egypt's foreign minister stated that the International Compact for Iraq would help end violence in Iraq.

Ahmed Aboul Gheit said: "We hope that we'll bring about a great amount of relaxation and normal ties.

"Namely [we hope] to bring infiltration to an end, to rebuild the Iraqi government ... to deter the armed militias in Iraq, to combat terror, and to widen the scope of the political process."

Nuri al-Maliki, the Iraqi prime minister, thanked the UN and conference delegates for their commitment, calling it a "defining moment in our history".

He said: "I believe that dovetailing the international efforts in order achieve our aspirations is a positive message."

Ban Ki-moon, the UN secretary-general, said: "A number of countries have made concrete commitments under the compact today. In particular there was broad support for the terms of the Paris Club on Iraq's outstanding debt."

In 2004, the Paris Club, a group of 19 creditor governments from major industrialised nations dealing with debt restructuring, agreed to cancel $32bn (80 per cent) of the $40bn they were owed by the government of Saddam Hussein, Iraq's deposed ruler.

Foreign ministers from more than 50 countries attended the conference, and various meetings were held on the sidelines.

Condoleezza Rice, the US secretary of state, said she called on Syria to take action to stop foreign fighters from entering Iraq in talks with Syria's foreign minister - the first high-level meeting in two years between the two countries.

Rice described her half hour of talks with Syria's Walid Moallem as "professional" and "businesslike".

But a substantive meeting between US officials and Iran appears less certain - though Rice is reported to have sat at the same table as the Iranian foreign minister at lunch.

The Iraqi government had been pressing for Rice and Manouchehr Mottaki to hold talks during the gathering, saying Washington's conflict with Tehran is only fuelling the instability in Iraq.

In a brief statement, Beckett said: "We had useful discussions which culminated simply in mutual recognition that there is scope for a better relationship between Iran and the United Kingdom."

Foreign ministers from five of the six nations involved in talks on North Korea's nuclear programme were also expected to meet in Egypt this week on the sidelines of the conference.

A South Korean foreign ministry official, speaking to AFP on condition of anonymity, said: "There have been preparations for a separate five-nation meeting but the schedule has yet to be fixed." Last Mod: 04 Mayıs 2007, 15:11
Add Comment