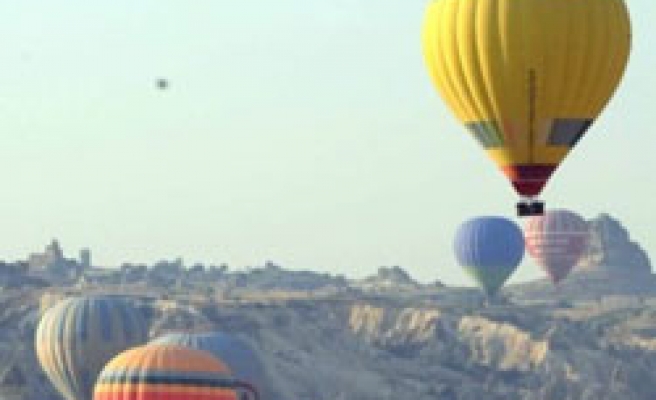 Around 50,000 tourists viewed Turkey's fairy chimneys by balloons, an executive of a Turkish company organizing balloon tours said on Thursday.

Halil Ozaslan, the chairman of the Executive Board of Goreme Balloons company, told AA correspondent that 50,000 tourists joined balloon tours in the Cappadocia region between 1997 and 2008, and majority of them was foreigners.

"Tourists flew over Cappadocia by balloons and see the area," Ozaslan said.

Unique in the world and a miraculous nature wonder, Cappadocia region is a common name of the area including provinces of Aksaray, Nevsehir, Nigde, Kayseri and Kirsehir in the Central Anatolia Region.

The interesting rock formations, known as "fairy chimneys", have been formed as a result of the tufa layer, sculptured by wind and flood water, running down on the slopes of the valleys. Water has found its way through the valleys creating cracks and ruptures in the hard rock. The softer, easily erodible material underneath has been gradually swept away receding the slopes and in this way, conical formations protected with basalt caps have been created.

The fairy chimneys with caps, mainly found in the vicinity of Urgup town, have a conical shaped body and a boulder on top of it. The cone is constructed from tufa and volcanic ash, while the cap is of hard, more resistant rock such as lahar or ignimbrite. Various types of fairy chimneys are found in Cappadocia. Among them are those with caps, mushroom like forms, columns and pointed rocks.