Fifty-nine Palestinians who were wounded in recent Israeli attacks in the Gaza Strip were hospitalized in İstanbul yesterday. 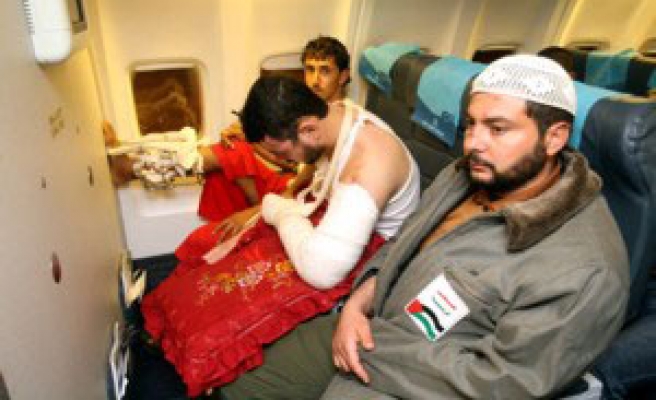 Bülent Yıldırım, chairman of the Humanitarian Aid Foundation (İHH) -- the charity organization which brought the wounded Palestinians to Turkey for treatment -- said eight of the injured were in serious condition.

"The wounded were hospitalized in 12 different private hospitals. Our Palestinian brothers and sisters will try to overcome the trauma they have experienced with the support of the Turkish nation. There are some patients who have had their legs or arms amputated. I hope the Islamic world will not have to witness such attacks again," he said.

The wounded Palestinians were brought to İstanbul on Tuesday by a chartered Turkish plane after spending weeks in Egyptian hospitals. Egypt opened its only crossing with Gaza last month to receive scores of injured Palestinians after an Israeli attacks.

Many Palestinians residing in İstanbul were quick to visit their compatriots at the various hospitals.

Halit Hams, who has been working in İstanbul for 18 years as a dentist, said he was delighted to see his cousin whom he had last seen 10 years ago. "I would like to extend my thanks to the Turkish nation and the officials who brought the wounded Palestinians to Turkey for treatment. Many of my relatives are still in Palestine. They are living in fear," he said. The 59 Palestinians will be sent back home after they have been treated.