The 5th Palestinian Refugees' Conference with a number of high level politicians and intellectuals from around the world recommended that joint Palestinian efforts should be coordinated at an international level, in the service of the Palestinian cause an 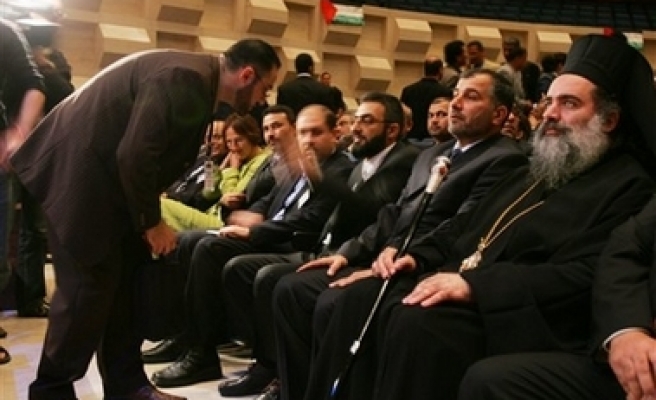 The 5th Palestinian Refugees' Conference began its works Saturday in the Dutch city of Rotterdam with a participation from a number of high level politicians and intellectuals from around the world.

The one day conference aims mainly at giving a chance to Palestinians living in Europe to express their opinions and make their voices heard particularly to the Palestinian leadership and to the international community, along with asserting their rights to return to the motherland, the sponsor and Secretary General of the Conference of Palestinians refugees living in Europe Adel Abdullah said.

Thousands of pro-Palestinian protestors in Rotterdam

"The European and Dutch boycott of Hamas is wrong and even stupid," Van Agt said. "We automatically pardon the occupier and sanction the occupied nation."

the Prime Minister Ismael Haneyeh delivered speech in the inauguration of the fifth annual conference of Palestinians in Europe gathered in Rotterdam of Holand on Saturday.

Addressing the conference on a TV screen via a satellite connection, Haneyeh thanked the Holland's ministers who requested him to join the conference" this expresses the voice of mind and conscious and solidarity with us, though ongoing embargo is still profound."

Breaking the embargo a goal

Breaking the embargo is a paramount goal of government's platform, Haneyeh elaborated; underscoring "the role played by the Palestinians in Europe" we are fully aware of the big efforts played by the son of the Palestinian people in Holland and other countries in addition to the media and institutional loop."

Among other issues the government's agenda is interested with "is the Palestinian refugees right to return to their homeland and belongingness," Haneyeh said.

The PM, closing his address, recalled to the memory that today (Saturday) marks Netherlands's Liberation Day of the Nazi occupation of the Netherlands during World War II "Rotterdam which celebrates its independence of Nazism, gives us the power to to work for our independence as we(the Palestinians ) are commorating the anniversary of Nakba," Haneyeh said.

At the end of its sessions Saturday in the Dutch city of Rotterdam, the 5th Palestinian Refugees' Conference asserted the right of return to the motherland.

A final statement by the conference said that such matter was "nonnegotiable", adding that the conference's previous recommendations should be reactivated by establishing a follow-up committee.

The conference also recommended that joint Palestinian efforts should be coordinated at an international level, in the service of the Palestinian cause.

The final statement, with 17 recommendations enclosed, requested that free and unbiased elections should take place among Palestinian refugees, especially those in Europe, urging the European Union and Parliament to help lift the "unjust" siege on the Palestinian people and its elected government.

Furthermore, the conference expressed deep concern and annoyance over the status of Palestinian refugees in Iraq, strongly denouncing violent acts targeting them in the war-torn country.

At least 21 European countries participated in the one-day event which aims mainly at giving a chance to Palestinians living in Europe to express their opinion. Last Mod: 06 Mayıs 2007, 15:30
Add Comment