70 million steps against coups in Turkey 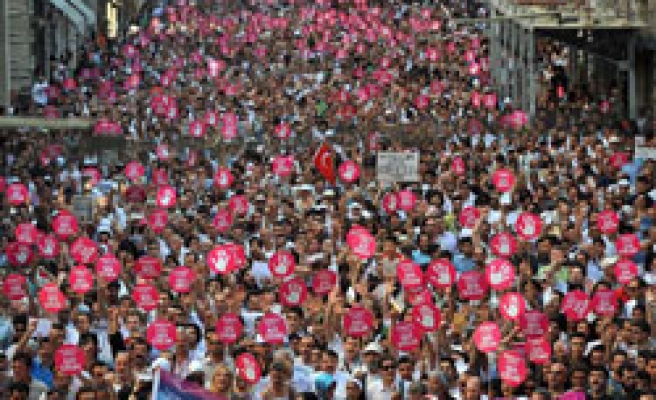 By Worldbulletin with agency

Thousands of people protested coups and an attempt to have the ruling party banned Saturday in Turkey's largest city.

The slogan of the march is "70 million steps against coups".

Saturday's demonstration was called by left-wing organizations, rights groups and Islamists and included a cross-section of people ranging from women in Islamic headscarves to students and intellectuals.

The constitutional court is to begin hearing submissions next month in the case brought by the country's chief prosecutor against the Justice and Development Party (AKP).

Prosecutor Abdurrahman Yalcinkaya is to appear on July 1 before the 11-judge constitutional court to argue why the AKP should be outlawed. On July 3, the AKP's representatives will deliver the party's verbal defense.

After the hearings stage, a court-appointed rapporteur will prepare a non-binding report on what verdict the judges should give. The court will then set a date to debate the case behind closed doors and reach a verdict.

The prosecutor launched proceedings in March against the Islamist-rooted AKP, arguing that it had become a "focal point" of anti-secular activity seeking to set up an Islamist regime in Turkey.

The AKP rejects the charges and says it is fully committed to the separation of state and religion enshrined in the constitution.