A beauty to die for, the Roe Deer in Turkey / PHOTO

"I hid in the brush and set up my tripod. My camera was ready. Within a few minutes the ferns began to stir and a pair of enormous eyes were gazing deep into mine." 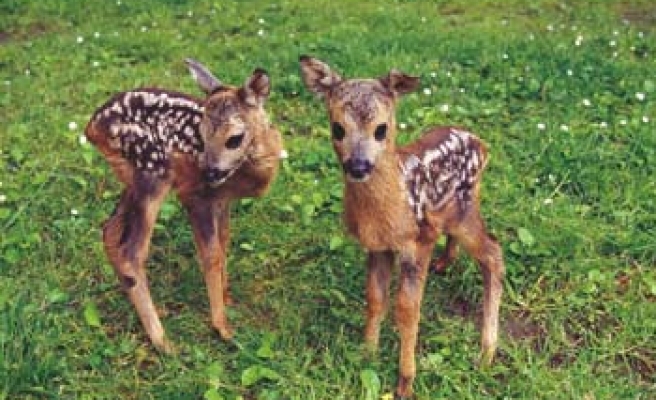 I was up before dawn, donned my camouflage suit and smeared my face and hands with soot. I left the hut in which I was staying and concealed myself in the brush beyond the meadow about a kilometer away to watch for the deer whose tracks I had spotted the day before. I arranged my portable chair among the bushes and sat down quietly. Then I set up my tripod and got my camera ready. Surely the deer would come to this clearing surrounded by beech and fir in the early morning hours.

AN EXCELLENT SENSE OF SMELL

Dampened by the rain, the dry twigs had softened and made no crackling sounds as I trod over them. The clearing in front of me was in full view. It was only just beginning to get light when something stirred in the ferns not far ahead of me. A deer was probably lurking there. Ten or so minutes later he appeared some twenty meters in front of me. He was standing behind a bush and gazing intently at me. It would be difficult for him to see me, but he had probably gotten my scent. I stood stock still. Then suddenly he leapt away. Later he came back again. How enormous were his eyes. He looked directly at me and made a sound like a dog barking. I couldn't believe my eyes or my ears. A deer barking! He leapt again and vanished from sight. I heard his barking again from the depths of the forest. I had disturbed him.

A POOR SENSE OF SIGHT

In the afternoon I told Vedat Beşkardeşler, a researcher from the Hunting and Wildlife Department of the Istanbul University School of Forestry, what I had seen: "Their eyes don't see well," he said. "He probably got your scent and warned the forest." In the days that followed I never got another chance to get that close to the deer. He noticed me every time, because keeping watch over his surroundings was his whole life. It was the only way to survive. His days passed escaping from wolves, lynxes and human beings. Even while drinking water, he would raise his head every few seconds and glance around to see if there was any danger. He could rotate his ears in all four directions. "They have an excellent sense of smell," Mr. Beşkardeşler said. "Their nostrils have been measured and their entire area is equal to 90 cm2. In humans it's only 2.5 cm2. At 300 million, they also have ten times as many scent cells as humans. And they clean their nostrils frequently with their tongues."

The Black Sea was preparing for winter. The leaves had turned yellow, and snow had fallen at the higher elevations. But it was not only the trees that were changing color. The coat of the deer we had seen near Kastamonu-Cide was also starting to turn grey. We had decided to work in the Seven Lakes district of Bolu this winter. What drew me to Bolu was the ready logistic support and my guide, Dursun Dikmen, a Wildlife Protection ranger in the Bolu Department of Nature Conservation and National Parks. As we went in pursuit of deer, we would need a shelter in case of storm. A caravan allocated to us by the Department of Forestry and positioned where we wanted it solved this problem for us. It had a stove, coal, food, and even a bed.

The snow around the Seven Lakes had reached 40 centimeters by mid-February. That day we explored the forest roads with a tractor. There were no tracks. Dursun said that the deer had been caught suddenly by the snow and been unable to leave their lairs. We drove the tractor up to a place where we thought there would be some deer and got down and started walking. Very soon we found the tracks of a lone deer. Dursun was a few meters ahead of me. Before long he raised his hand to his head and waved two fingers, which meant a roe deer (Capreolus capreolus) elaphus). Five fingers meant a red deer(Cervus elaphus). I went up to him. He crouched down in the snow and told me to follow the tracks. I advanced about 15 meters and noticed some movement ahead.

I was face to face with female a roe deer. I raised my camera but got only two shots before she ran away. We did not see another deer that day.

WHAT IF IT DOESN'T SNOW?

By the next day the snow was no longer soft and made crunching noises as we walked. When Dursun said it was no use until it snowed again, I was demoralized. "What if it doesn't snow?" I asked. "It will next year," he replied. But it wasn't only deer that we could photograph. The forest was full of other species that could see as well as having a good sense of smell and hearing. All the animals in the forest warn each other of danger. Crows were flying overhead, bringing the whole forest to its feet with their cries. And when the wild boar caught our scent they fled en masse, making an enormous din or they did so. When the other animals heard them, they ran away too. The only way to see even one deer was not to frighten a single animal in the forest, and that was very hard to do.

A little snow fell every day throughout the month of February, affording us great opportunities. As I followed the tracks, I kept one eye on the upper slopes. When deer are going away to rest, they cut diagonals across the slopes as they return in the direction from which they've come to lie down. That way they can see where they've just been and can check if anything is following them. It was the end of March. "'Çorak' time is coming," said Dursun. 'Çorak' is the phenomenon of animals ingesting soil in the spring, a behavior that continues from mid-April to late May. When the females are pregnant and the males' antlers are growing, they feel a need for several minerals, which they get, together with the intestinal microorganisms that aid digestion, by ingesting soil. They also lick the salt in salt beds or drink bitter-tasting spring waters which are rich in minerals.

WE SAW NO DEER

I was surprised to see the deep troughs created by the animals in the 'çorak' areas that Dursun showed me. I wanted to photograph this phenomenon. We set up observation points at three locations, two of them under trees. But a beekeeper came and set up a hive near one of them, and woodcutters were working near the other one. As for the third, although we waited there time after time no deer appeared. After doing a survey of the surroundings, we discovered that the deer had gone to another 'çorak' where we had nothing set up. So we were unsuccessful.

Roe deer eat grass, brush and the leaves and young shoots of trees. They also consume the fresh fruit of trees and bushes, especially apples, beech seeds, acorns and chestnut seeds, and other fallen fruit and seeds, which they find even in winter by rooting in the snow. They also like to eat pine needles.

A MOTHER DEER AND HER FAWN

When spring comes, the pregnant does leave their groups four weeks before the birth to go to their fawning zones. The same spot is chosen every year, an area of just a few hectares, which the pregnant doe stoutly defends against other females. Immediately after giving birth, the mother deer eats the placenta and the grass on which her baby fell when born. This is a measure taken against potential predators who might discover the fawn by its scent. Except when suckling her infant, the mother deer stands at a distance of 200-300 meters from her baby, thereby distracting attention from it. In the mother's absence, the baby lies motionless under the brush. When people wandering in the forest come upon such fawns in the brush, they assume they have lost their mothers and take them home to care for them. But this is a big mistake.
I should also point out that the irresistible beauty of the fawns plays a role in this.

Thanks to Turkey's numerous forests of deciduous trees, roe deer exhibit a distribution in all the Black Sea provinces from Artvin in the east to Kırklareli in the west as well as in the provinces of Ardahan, Bilecik, Bursa, Balıkesir, Çanakkale, Bolu, Kütahya, Tokat, Amasya, Çorum, Karabük and Hatay. I have been near all the areas in which deer are found, and have had an opportunity to talk with the villagers there. Villages that have been vacated due to migration to the cities have resulted in an expansion of the deer habitat. This, combined with Nature Conservation and National Parks, has rapidly driven up the deer population. While I was writing this article, my wife's mother called to tell her that there were deer all around their house in Trabzon-Maçka and teased me saying that I didn't need to wander all over the country but that I should come to her and she would let me take photos!

Deer grow new antlers every year. The old ones fall off in December and the new ones begin to appear towards the end of January. They are covered with fine hair like a kiwi fruit which they slough off in May by rubbing their antlers against trees.

The new antlers with their sharp tips are the buck's offensive and defensive weapon. In June potentially fatal disputes erupt with other males over the mating females and territorial dominance. I witnessed one such dispute to the bitter end in the forests of Cide. Starting deep in the forest, it continued in a clearing immediately in front of me and culminated in the flight of one of the males.

It was almost morning in Eskişehir's Türkmen Baba forest. The bellowing of the stags mingled with the chirping of the birds.

The outline of a fox darted across my line of vision, and I recalled the words of my guide, Dursun Dikmen: "What's the good of a forest if there are no animals in it?"