A story of a headscarf activist in Turkey PHOTO

The woman talked about the real reason behind her dislike of Atatürk. 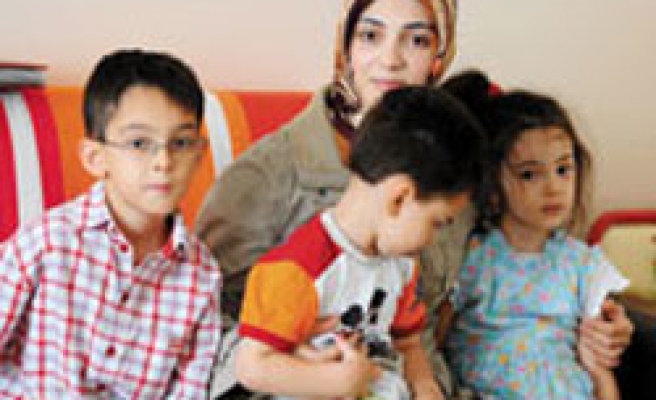 Since a woman announced on a live television show that she does not like the founder of the Republic of Turkey, she has drawn the ire of many segments of society. She has been labeled a "provocateur" and accused of having been paid to utter those words.,

But no one has focused on the real reason behind her dislike of Atatürk. We talked to the person behind the controversy to find out what shapes her views.

Nuray Canan Bezirgan, 31, is a mother of three and wears a headscarf. But she is also more than that. Bezirgan has been one of the few vocal opponents of a ban on wearing headscarves on university campuses that began to be implemented in 1998 in the wake of the Feb. 28 unarmed military intervention against a coalition government with the stated purpose of preventing the rise of Islamist movements. The entire country learned her identity when she appeared on a political debate show hosted by Fatih Altaylı on the Kanal 1 television station and said "I don't like Atatürk, but I like Ayatollah [Khomeini]," the leader of the 1979 Iranian revolution.

"First of all, that is not what I said," Bezirgan says, angered by the media's simplifying her point to a single phrase, which she did not utter in one sentence. She says she was invited as a guest to discuss a recent ruling of the Constitutional Court annulling a government-sponsored amendment that would have lifted the nearly two-decade-long ban on the headscarf. She was one of the guests, she said, because she had legal troubles when an anti-headscarf campaign was started after the Feb. 28 process. "In 1998, I was a second-year student at İstanbul University's Health Services Vocational College," she says. On one day, a few weeks before the graduation ceremony in June of that year, she was ordered by her instructor to leave a final exam because she was wearing a headscarf. When she refused, the instructor called the police, which were already deployed on campus as a safety measure against daily headscarf protests and journalists filming them. The police entered the classroom. She remembers them as Robocop figures and speaks of being very scared because the police came in only for her, with a horde of media members tailing them, and dragged her out. She was detained by the police and later charged with "obstructing education," eventually being expelled from school. She was released pending trial and when the trial ended in the June 2000, she was sentenced to six months in prison, a sentence later converted to a monetary fine. Many other people had similar experiences, but only a few of them spoke out.

Bezirgan said the first time she became interested in the headscarf issue was when she saw protesters like her future self when she was 14 or 15. "I didn't know anything about the headscarf or Islam back then. I remember I saw headscarved students at the Cerrahpa?a School of Medicine. I must have been there for a medical problem. I asked them what they were protesting and they told me. That was the first time I heard of such a problem in Turkey."

Her mother, with roots in the former Yugoslavia, was from the western Thrace region, where she was raised, while her father's side of the family is from the more traditional central Anatolian province of Kütahya. "I was mainly brought up with the culture of Thrace," she says. She was the first woman on her mother's side to cover her head and says she even had difficulties with her family when she adopted her religious convictions. "It really was difficult when I lived with my family," she says. But later, she moved out to a state dorm, where things became easier. While studying at the university she met her husband, 33-year-old Ömer Bezirgan, who shares a similar outlook on life.

Her first detention on the day of that final exam, however, was not her last. In February 1999 she was detained once again, along with 17 others, during a demonstration of headscarved students at Marmara University. She was four-and-a-half-months pregnant with twin boys. "I was not even part of the demonstration. I was waiting for a friend there," she recalls. When she fainted in the detention cell and was taken to the hospital she was told by the doctors that she had lost one of the babies. She spoke of this terrible memory while showing a forensic medicine report of the incident citing an in utero mort fetalis. After her release she was charged with "opposition to the law on demonstrations," of which she was acquitted at the trial's conclusion. She also remembers that male protesters were beaten by the police and humiliated by officers. At some point during her hospitalization, an officer even tried to remove her from the hospital to take her to court despite doctors' objections.

The psychological trauma of what she had been through was heavy, but she nevertheless continued to protest for her cause. In November 1999 she was detained once more by the police during another headscarf protest at Marmara University after releasing doves as part of the demonstration.

However, it was not until November 2000, when she appeared on a television program with journalist Mehmet Ali Birand on CNN Türk that she considered leaving the country. She was threatened physically during the show when a viewer called in and said: "We know where you live. We will kill your other child, too." In retrospect, she sees she had every reason to be scared. Many of those living through problems stemming from their wearing a headscarf were simply not vocal about what was going on. This, she believes, is an important reason why so many people do not understand what the big deal about the headscarf is. "Taking my headscarf off is like cutting my head off," she says, but complains there weren't too many people to explain this to others. "Most of the girls' families did not let them [appear on TV shows or make statements to explain their situation]," she suggests as an explanation of her being one of the few who are vocal about their problems in those times.

This happened at a time when international rights groups such as Amnesty International and Human Rights Watch (HRW) had taken an interest in her plight. She and her family left Turkey, aided by HRW, which suggested trying to seek asylum in Canada. The country granted the couple asylum, deciding that they were under pressure from their government in practicing their religion.

Bezirgan and her family lived until 2006 in Canada, where she and her husband both majored in English for Academic Purposes (EAP) and tourism and recreation with student loans from the Canadian government. They decided to return to Turkey, because Canada, Bezirgan says, proved to be "too liberal" to raise her children with the values she wanted to. "For example, they are too liberal on issues such as homosexual rights. At school the teacher tells children it's possible to have a family with two mothers only or two fathers. It is confusing for the children." However, Ömer Bezirgan quickly notes, "We haven't fully settled yet; we are only trying out [living in Turkey]." The family rents the house they live in and complains of financial problems as they owe more than $50,000 to the Canadian government in student loans. The family may decide to give up and move back to Canada.

Back at home now, Bezirgan is facing an investigation for saying "I don't like Atatürk" on television. Three separate prosecutors who suspect her words might be a violation of respecting the memory of Atatürk, a crime under the current penal code, have moved to prosecute her.

"There is nothing here against the personality of Atatürk. I am only discussing the opinions of this personality as well as the opinions and applications of these opinions by people citing his thoughts. They are trying to present me as if I had insulted Atatürk, the person, and that is not the case."