Abbas rebuffs call by Rice to return to peace talks

Palestinian president Mahmud Abbas said on Wednesday that he will resume suspended Middle East peace talks only after Israel ends violence in Gaza. 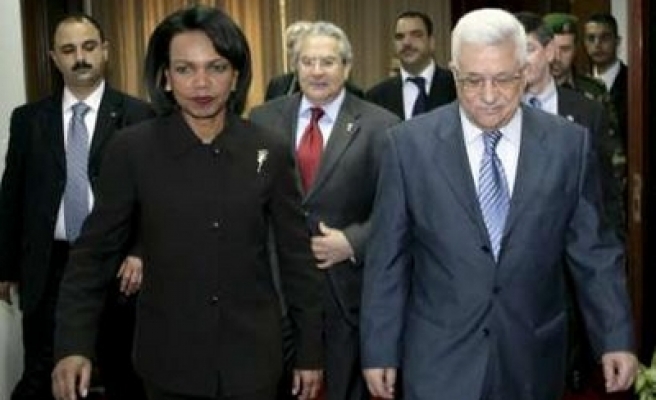 "The negotiations must resume, but only after a truce takes effect," Abbas told reporters after talks with visiting Hungarian President Laszlo Solyom.

He said US Secretary of State Condoleezza Rice -- who was on the final day of her latest peace mission in the region -- was involved in the efforts towards the truce, along with Egypt.

"I spoke today again with Secretary of State Rice ans she will send an envoy David Welch to Cairo where intense efforts are being deployed with a view to reaching a truce," he said.

Rice met Abbas on Tuesday on the first day of her trip.

The Palestinian president suspended peace negotiations with the Israelis at the weekend in protest at army raids that have killed more than 126 people in Gaza, including children and other civilians, over the past week. Two Israeli soldiers and one civilian have also died during the same time frame.

Abbas also called for Palestinians and Israelis to meet with William Fraser, a lieutenant general appointed in January to oversee the sides' compliance with the international roadmap peace blueprint.

"If such a meeting is organised, we will participate and the Israeli side also," he said.

A senior Palestinian official speaking on condition of anonymity said that Abbas had refused an offer from Rice to organise a meeting between him and Olmert in her presence.