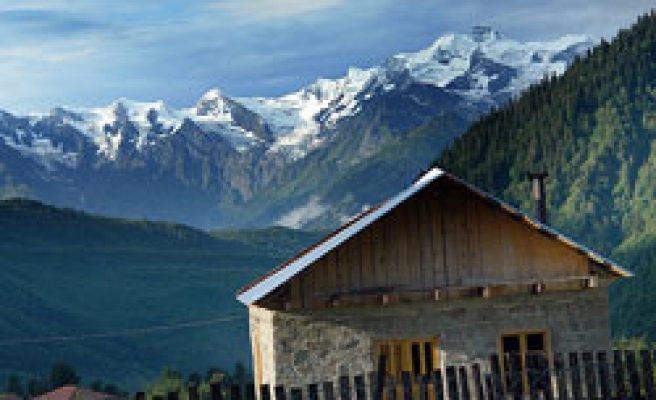 Abkhazia's insurgent army said on Sunday it had defeated Georgian forces without damaging a single home, but the captured villages it displayed to reporters were empty and the houses ransacked.

Only two of the villagers in Azhara, towards the top of the remote Kodori gorge which the Georgians fled last week in front of advancing insurgent forces, remained. One was a man too ill to be moved, and the other was Galina Cherkashina, 64.

"When the first bombardment started we were all at a funeral, we were burying my landlady. We had not properly buried her even when it started. They just threw the earth in and ran away," she told Reuters.

As an ethnic Russian, she said she was afraid of going to Georgia, where Russian troops have battled Georgian forces over the last week. Most other residents in the gorge were ethnic Svans, who are related to the Georgians, and had fled.

Although Russia has pledged to pull its troops back from Georgia on Monday, tension remained very high in the second rebel region of South Ossetia, which Tbilisi's forces bombarded 10 days ago, provoking the crisis.

Abkhazia took advantage of the crisis to seize the upper part of Kodori, the last part of its territory still under the control of the central government in Tbilisi.

Insurgent forces say they had warned civilians of the impending attack, but Cherkashina's words suggested that warning, if it existed, did not filter down to everyone in the village.

As she spoke, cows wandered among the village houses. Chickens gasped in the baking heat, while soldiers lay in the shade.

A single shot rang out over the village as Cherkashina talked, but the soldiers did not even flinch.

As the insurgents said, the village houses were undamaged, but the contents were scattered. In one house, wedding photographs lay heaped in a corner, the bed was overturned, and a cupboard was shattered and its contents rummaged.

In some houses, electrical equipment appeared to have been removed, although in one a television and bottle of alcohol remained.

The Abkhazian forces were keen to show off the accuracy of their rocket strikes and exhibited a building that had once been an arsenal for mortar shells and rocket-propelled grenades.

It appeared to have taken a direct hit, and was totally destroyed. Unexploded ordnance was scattered on both sides of the road, most of it still in its original packaging but burnt by the blast.

Across the road a Georgian bank was ransacked, its cash machine ripped open. A small shop had also been looted, and was knee deep in rotting food and packets of soup. Sweets and watermelon rinds were scattered outside.

Deputy Defence Minister Gari Kupalba said he was confident local residents would return when they were sure it was safe, and said almost 200 had already done so.

But he was not too concerned if the 700 refugees that have been registered in Georgia proper stayed there.

"A lot of the people here think they are Georgians, although they are Svans. If they do not want to live with Abkhazians, then that is their choice. They can stay where they are," he said.

And Cherkashina, who was walking to the looted shop to try to find washing-up liquid among the trash, was not sure her neighbours would ever return home.

"I look out for smoke in the forest all the time, in the day and in the evening, because if there's smoke there are people, but I never see any," she said. "I think a lot of people could stay in Georgia."