Pope Benedict XVI began his first papal trip to Latin America on Wednesday by speaking against abortion in Brazil. 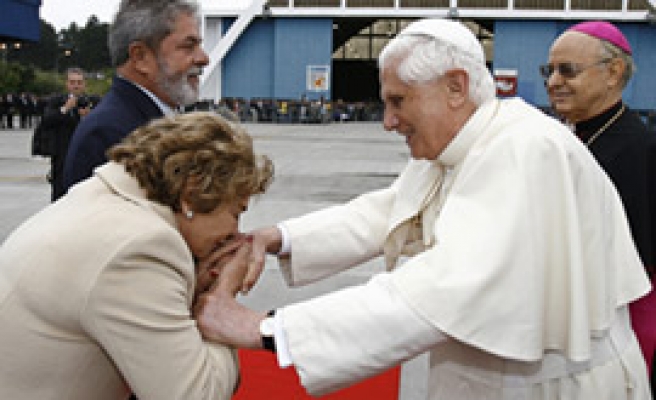 He is to celebrate a series of open air Masses before travelling to Aparecida for the main event of the visit, a conference of Latin American bishops.

There he is expected to touch on the growing challenge the Catholic Church faces from evangelical groups.

In a news conference on his flight, he also suggested that Catholic politicians in Mexico had excommunicated themselves by legalising abortion in the capital.

Benedict, who will inaugurate an important regional bishops' conference, said he was certain that the bishops will reinforce "the promotion of respect for life from the moment of conception until natural death as an integral requirement of human nature".

Thousands waited in the rain and cold for a glimpse of Benedict as he blessed them at the monastery where he is staying, he turnout was relatively poor in the world's largest Catholic nation and in a city of 10 million.

The Vatican says Benedict will confront major challenges during his visit, such as the church's declining influence in Brazil, the exodus of Catholics to evangelical Christian churches, and efforts to expand access to abortion in the region.

The Brazilian president greeted the Pope as his plane touched down at Sao Paulo's international airport.

"I extend my greetings to all the peoples of Latin America and the Caribbean in the words of the Apostle: 'Peace to all of you who are in Christ'," the Pope said, speaking in Portuguese.