The scandal over the treatment of detainees at Abu Ghraib unleashed a wave of global condemnation against the United States when images of abused prisoners surfaced in 2004. 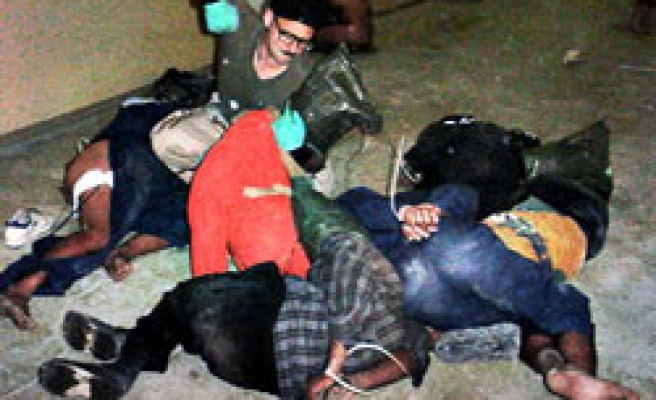 Four Iraqi men are suing U.S. military contractors who tortured them while they were detained in Abu Ghraib prison, according to lawsuits being filed at U.S. federal courts on Monday.

The scandal over the treatment of detainees at Abu Ghraib unleashed a wave of global condemnation against the United States when images of abused prisoners surfaced in 2004.

The four plaintiffs, all later released without charge, described their experiences to Reuters on Monday at an Istanbul hotel, where they periodically meet their U.S. legal team. They gave accounts of beatings, electric shocks and mock executions.

The first suit was filed on Monday in Seattle, Washington, and the others were being filed in Maryland, Ohio and Michigan, where the contractors reside.

CACI provided interrogators at Abu Ghraib and L-3 provided translators at the prison.

CACI International claimed the charges in the lawsuits were "unfounded and unsubstantiated".

An L-3 Communications Holdings Inc spokeswoman had no immediate comment.

Farmer Suhail Naim Abdullah Al-Shimari, 49, told Reuters he was caged, beaten, threatened with dogs and given electric shocks during more than four years in detention. He was released in March without being charged and without any judicial process.

"I lost my house, my family were made homeless and left without a breadwinner. I lost four-and-a-half years of my life and all they did was say sorry," he told Reuters.

Some lower-ranking soldiers have been convicted in military courts in connection with the physical abuse and sexual humiliation of Abu Ghraib detainees.

The latest lawsuits follow a similar one launched in May in federal court in Los Angeles by another former Abu Ghraib detainee, Emad Al-Janabi. The latest plaintiffs sought unspecified compensatory and punitive damages.

"This litigation will contribute to the true history of Abu Ghraib. These innocent men were senselessly tortured by U.S. companies that profited from their misery," said Susan L. Burke, one of the attorneys representing the detainees.

Sa'adoon Ali Hameed Al-Ogaidi, a 36-year-old shopkeeper and father of four, described being caged, abused and paraded naked as one of the unregistered "ghost" detainees, hidden for a time from the International Committee of the Red Cross.

"In our Arab culture being stripped naked is one of the worst rights violations. It made me feel ashamed and it has left a deep scar in me," he told Reuters.

"What I want is for the perpetrators to be brought to justice and punished for what they have done," he said.

According to the complaints, the contractors participated in physical and mental abuse of the detainees, destroyed documents, prevented the reporting of torture and misled officials about the state of affairs at the prisons in Iraq.