More than 1,000 Afghans chanting "Death to Pakistan" rallied outside the Pakistani embassy in Kabul after deadly clashes between the two countries' border guards. 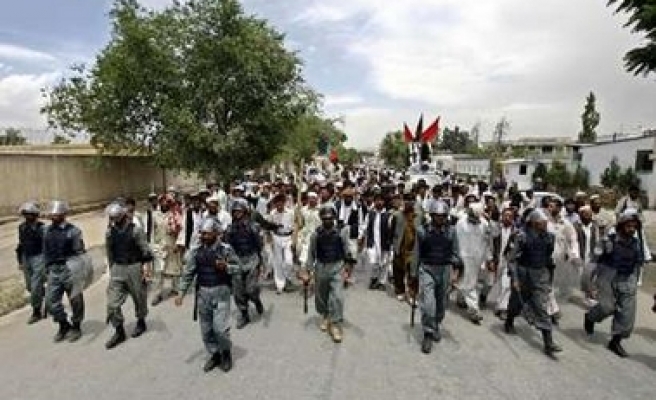 More than 1,000 Afghans chanting "Death to Pakistan" rallied outside the Pakistani embassy in Kabul after deadly clashes between the two countries' border guards.

Fighting between Afghan and Pakistani forces at the weekend left 14 people dead, including a NATO soldier who was shot after a meeting on the Pakistani side of the border aimed at calming the tension.

The demonstrators blocked a road leading to the embassy for several hours as policemen in anti-riot gear kept the mob away from the embassy gate, an AFP reporter said.

"Pakistan invaded Afghanistan" and "Death to (Pakistani President Pervez) Musharraf" were among the slogans shouted by the protesters, mostly tribesmen from the eastern border province of Paktia where the clashes occurred.

Afghanistan said on Tuesday that the clashes, the worst for decades between the two supposed allies in the US-led "war on terror", would further strain ties between Islamabad and Kabul.

The previous day, the Afghan government summoned Pakistan's ambassador, accusing the neighbouring army of an "intrusion" into Afghan territory and of being provocative.