A U.S.-led raid Sunday killed as many as six Afghans — including a woman and a teenage girl — and spawned protests by hundreds of angry Afghans chanting "Death to Bush!" 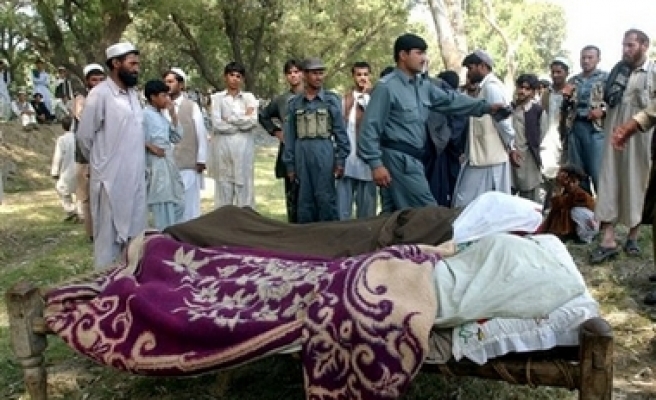 A U.S.-led raid Sunday killed as many as six Afghans — including a woman and a teenage girl — and spawned protests by hundreds of angry Afghans chanting "Death to Bush!"

The civilian deaths infuriated the protesters, who carried five bodies to a main highway and blocked traffic with felled trees during the demonstration. The bodies of the women were entirely covered by sheets, while the men's faces were revealed.

"Their operation was based on incorrect reports, and they carried out a cruel attack on these houses," said local resident Akhtar Mohammad at the protest. "We are not the enemy, we are not al-Qaida. Why are they attacking us?"

Afghan officials have repeatedly pleaded with the United States and NATO to take care during operations that might harm civilians, and the latest violence is sure to deepen distrust among Afghans, whose support for international forces and the shaky U.S.-backed government is waning.

The protest was held on the same highway where a U.S. Marines convoy, fleeing after being hit by a suicide car bomb on March 4, fired indiscriminately on vehicles and pedestrians, killing 12 people.

The protesters focused their anger on President Bush and his Afghan counterpart Hamid Karzai, as well as the governor of Nangarhar.

In the March 4 shootings, the Afghan Independent Human Rights Commission said the Marines, after being hit by an explosives-rigged minivan, violated international humanitarian law by using excessive force when they opened fire at civilians along a 10-mile stretch of road, leaving 12 people dead.

A U.S. military commander has also determined that the Marines used excessive force and referred the case for possible criminal inquiry.