Seven years after neo-con Bush saying that Jesus Christ was his favorite philosopher, the personal faith of US presidential candidates has become a very public part of the presidential campaign. 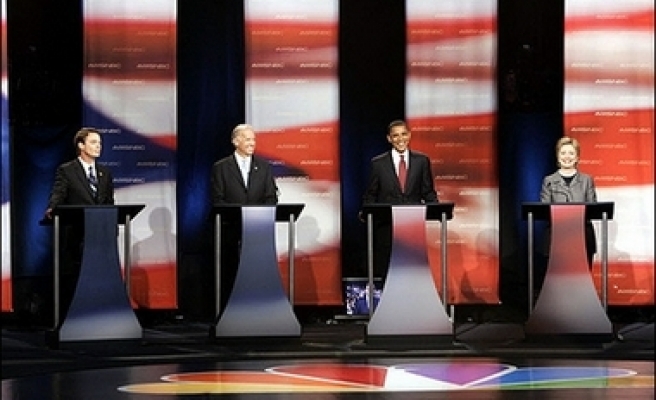 Seven years after George W. Bush saying that Jesus Christ was his favorite philosopher, the personal faith of American presidential candidates has become a very public part of the presidential campaign.

Lately it seems all the leading American presidential candidates are discussing their religious and moral beliefs — even when they'd rather not.

Indeed, seven years after George W. Bush won the presidency in part with a direct appeal to conservative religious voters — even saying during a debate that Jesus Christ was his favorite philosopher — the personal faith of candidates has become a very public part of the presidential campaign.

Democratic Sens.Hillary Rodham Clinton and Barack Obama have hired strategists to focus on reaching religious voters. Obama's campaign holds a weekly conference call with key supporters in early primary and caucus states whose role is to spread the candidate's message to religious leaders and opinionmakers and report their concerns to the campaign.

Democrats in general are targeting moderate Roman Catholics, mainline Protestants and even evangelicals, hoping to enlist enough voters for whom religious and moral issues are a priority to put together a winning coalition.

Next week, Clinton, Obama and former North Carolina Sen. John Edwards are scheduled to address liberal evangelicals at a forum on "faith, values and poverty."

Some top-tier Republican candidates, the natural heirs to conservative religious support, are finding the issue awkward to handle.

Former Massachusetts Gov. Mitt Romney has been questioned so much about his Mormon faith — 46 percent of those polled by Gallup in March had a negative opinion of the religion — that he has taken to emphasizing that he is running for a secular office.

Former New York Mayor Rudy Giuliani, a Catholic who says he gave serious consideration as a young man to becoming a priest, is fending off critics who say he should be denied the sacrament of communion because he supports abortion rights.

Religion has become such a common element of presidential politics that during the first televised debate among the 2008 Republican candidates, a reporter asked if any did not believe in evolution — three Republicans raised their hands: Kansas Sen. Sam Brownback, former Arkansas Gov. Mike Huckabee and Colorado Rep. Tom Tancredo.

"To many Americans, religion is a very important part of their life and they are interested in how religiosity influences candidates," said John Green, a University of Akron political science professor and senior fellow at the Pew Forum on Religion and Public Life.

"Where this election cycle is different," he said, "is that more of the Democratic candidates are speaking out about their faith, and they've organized their campaigns to appeal to religious voters."

In past campaigns, Republicans nearly cornered the conservative religious vote. The 2004 Democratic nominee, Sen. John Kerry of Massachusetts, is a Catholic but lost the Catholic vote 47 percent to 52 percent to Bush, according to exit polling. Bush won white evangelicals 78 percent to 21 percent.

Now, Democrats are speaking plainly about their beliefs. In March, Edwards told the multi-faith Web site Beliefnet.com that Jesus would be appalled at how the nation has ignored the plight of the suffering.

"I think the majority of Americans, the people who largely decide elections, what they are looking for — particularly in these times — is a really good and decent human being to be president," Edwards said in an interview with The Associated Press. "If you are a person, a man or woman, of faith, that has an impact on how they view you as a human being, whatever your faith is."

Jim Wallis, CEO of Sojourners/Call to Renewal, which is holding next week's liberal evangelical forum, said in a statement that "faithful voters" are "hungry for a real conversation about the big moral issues of our time."

The forum is the latest in a series of events in which presidential candidates have addressed the issue of religion and politics.

Democratic Sen. Chris Dodd, a Catholic, told an April forum at Boston College that Democrats have made "a huge mistake over the years" by not talking more openly about how their personal faith informs their public policy positions.

Brownback, a former Methodist who converted to Catholicism in 2002, told the same forum that faith "doesn't make all your decisions, but you can't segregate it out — it's part of the values basis you bring."

In one of the first joint appearances of the 2008 campaign, Brownback and Obama were guest speakers at the evangelical Saddleback Church in Lake Forest, Calif., where best-selling author Rick Warren is pastor.

Obama very close with own pastor

Obama's close relationship with his own pastor at Chicago's Trinity United Church of Christ, whose theology emphasizes "black values" and strengthening the black community, has also been a campaign issue. Obama withdrew an invitation to the pastor, the Rev. Jeremiah Wright Jr., to speak at his presidential announcement in February.

Last year, Obama chastised fellow Democrats for failing to "acknowledge the power of faith in the lives of the American people," and said the party must compete for the support of evangelicals and other churchgoers.

"Not every mention of God in public is a breach to the wall of separation. Context matters," he said.

Ironically, it is some of the top Republican candidates who are shying away from public discussions of their faith.

"I don't think that a person who's running for a secular position as I am should talk about or engage in discussions of what they in their personal faith or their personal beliefs think is immoral or not immoral," Romney said in an AP interview last week in response to a question about whether he believes homosexuality is immoral.

Giuliani didn't want to talk about his faith, either. "The mayor's personal relationship with God is private and between him and God," his campaign told AP.

It may be difficult for Giuliani to keep a lid on discussions of his faith. Earlier this month,
Pope Benedict XVI said he agreed with bishops who said Catholic politicians had excommunicated themselves by legalizing abortion in Mexico City.

But support for abortion rights doesn't necessarily hurt candidates with Catholic voters, who support legalized abortion in all or most circumstances by 53 percent to 43 percent, according to 2004 exit polling.

"Catholics are in a middle position — Republicans woo them on things like abortion and same sex marriage, but Democrats are closer to their core teachings on things like health care for the poor, the death penalty and social welfare policies," said Clyde Wilcox, a Georgetown University professor and author of several books on politics and religion.

"They're a swing bloc not fitting clearly in either party, which makes them a very valuable constituency in elections."