Bertie Ahern, the prime minister of Ireland, has emerged as a possible candidate for the Europe Union's first full-time president amid uncertainty over whether the bloc is seeking a global figure like Tony Blair or a lower-profile fixer. 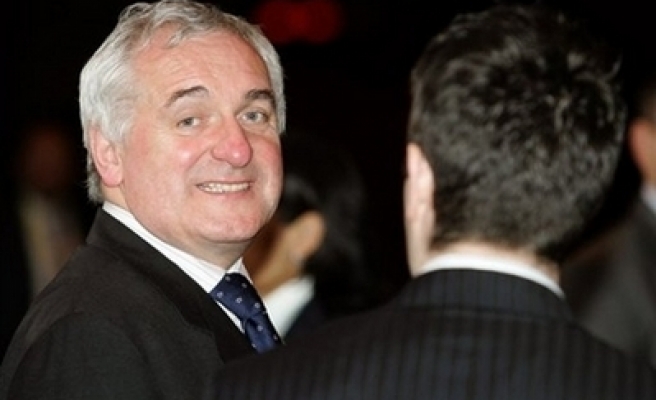 Speculation about Ahern - who has not yet declared his intentions - and several other likely contenders has underlined the lack of clarity over what type of person the European Union wants as its new figurehead.

No one has yet declared a candidacy, but diplomats assume Blair and Jean-Claude Juncker, the prime minister of Luxembourg and a veteran of EU politics, are front-runners.

Providing the bloc's new Lisbon treaty is ratified, the leaders of the 27 EU states are due to decide in December who will become president of the European Council, the body where EU governments meet. The post is for two and a half years.

While Blair, the former British prime minister, is recognized as a formidable politician, his stance on the war in Iraq and his reputation as a politician who operates on conviction rather than consensus would make him a divisive candidate.

The French president, Nicolas Sarkozy, has supported Blair though he has also spoken warmly about Juncker. Since front-runners for top EU jobs often end up losing out, some believe that Sarkozy's backing of Blair might be tactical rather than real.The decision by Britain to stand aside from EU initiatives like the euro is a clear handicap, and Germany and Italy have already expressed a preference for a candidate from a country engaged in all core EU activities.

"There is no consensus on what the profile of a candidate should be, or on whether that person should be from a country that participates in all aspects of European integration," said Thomas Klau of the European Council on Foreign Relations.

To complicate matters, the EU also intends to appoint a new high representative for foreign relations whose powers could overlap with those of the president.

After U.S. presidential elections in November, the climate might make European leaders feel more inclined to opt for a big hitter.

"There are two options," said a EU diplomat speaking on the condition of anonymity. "One is a big international player who represents Europe on the international stage and not only chairs EU summits with Russia and China but has a relationship with their leaders. The other is just someone who chairs the European Council."

Blair's main advantage is that, so far, he is the only global name in play. Though the German chancellor, Angela Merkel, would be an ideal candidate for many - combining political weight with a tough but consensual style - analysts say she is unlikely to want to quit German politics before elections next year.

Among the lower-profile candidates, Juncker, the longest-serving EU prime minister, has credentials in the world of European consensus-making, but comes from the EU's second-smallest nation and has limited appeal outside the core of the six founding members of the bloc.

Regarded as an effective chairman of the euro-zone countries, Juncker's last term as president of the European Council ended with the collapse of important EU budget negotiations.

By contrast, during the Irish presidency of the EU, Ahern succeeded in reaching an agreement on the first attempt to adopt a European constitution. In June, Ireland will hold a referendum on the Lisbon treaty, which replaced the constitution after it was rejected by French and Dutch voters.

If he secures a "yes" as opinion polls predict, Ahern would gain in stature. However, controversy in Ireland about his personal financial dealings in the 1990s could cast a shadow over his prospects.

Rasmussen's prospects would be weakened by Denmark's opt-outs from the euro, justice and home-affairs policy and defense. Although he may try to end some of these areas of self-exclusion this year, holding a referendum on all three would be risky.

While Barroso has proved adept at finding the center of gravity among EU member states - a key task for a council president - the timing of the appointment is difficult for him. His current mandate as president of the European Commission does not expire until the middle of 2009.

Ahern received encouragement from the Polish prime minister, Donald Tusk, on a recent visit to Warsaw.

"For Poland and the Poles, and for my part, if the taoiseach of Ireland had such an idea and intention, the approach of the Poles would be most obviously and certainly favorable," The Irish Examiner reported Tusk as saying about Ahern last week. Ahern would be a serious candidate if he managed to resolve questions over his financial dealings, Klau argued. Blair would, he added, suffer from Britain's self-exclusion from the euro and his role in the Iraq debacle that divided Europe.

"There is a perception that Blair chose to polarize, rather than de-escalate, the conflict," Klau said.

Another EU diplomat, speaking on condition of anonymity, said Ahern could emerge if Blair's candidature was blocked. "He might be one of the people who profess not to have considered it who might just jump at it," he added.