Ahmadinejad in Iraq for landmark trip

President Mahmoud Ahmadinejad arrived in Baghdad on Sunday, the first Iranian president to visit Iraq since a bitter eight-year war in the 1980s. 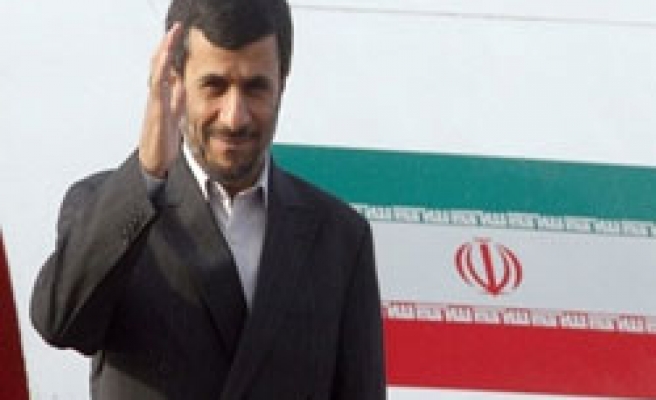 President Mahmoud Ahmadinejad arrived in Baghdad on Sunday, the first Iranian president to visit Iraq since the two neighbours fought a bitter eight-year war in the 1980s that killed a million people.

His trip is expected to be as much about symbolism as it will be about cementing ties between the neighbours, which are both run by Shi'ite majorities. It will be closely watched by the United States, which has more than 150,000 troops in Iraq.

Ahmadinejad, whose government is at odds with Washington over Tehran's nuclear programme, has repeatedly called for U.S. forces to leave Iraq, blaming them for violence that has killed tens of thousands of Iraqis since the U.S.-led invasion in 2003.

Ahmadinejad received a red carpet welcome at Talabani's house, with a military band greeting him on his arrival.

He was due to hold talks with Talabani, Prime Minister Nuri al-Maliki and Vice President Adel Abdul-Mahdi.

Abdul-Mahdi told Reuters on Saturday that Iraq wanted to use Ahmadinejad's visit to resolve a number of long-running disputes including defining their common border, a flashpoint issue that sparked the 1980-88 war between the two countries.

Speaking on the eve of his trip to Baghdad, Ahmadinejad said his visit would help improve security in Iraq.

"It will surely help strengthen the Iraqi nation and the government ... and peace and security in the region," he told Iranian state television. "Withdrawal of the occupying forces is in everyone's advantage," he added.

Relations between Iran and Iraq have markedly improved since the 2003 invasion that ousted Saddam Hussein, and analysts say Ahmadinejad will use his visit to show Washington that Tehran is a power in Iraq that cannot be ignored or sidelined.

The Iranian president has sought to counter U.S. efforts to isolate Tehran over its nuclear programme by seeking to improve ties with Arab states in the region. His visit comes before a March parliamentary election that will also test his popularity.

Iran has close ties to Iraq's Shi'ite leadership, many of whom were in exile in Iran under Saddam's rule and both countries have longstanding ethnic and religious links.

But analysts say the extent of Tehran's influence in Iraqi politics is unclear. Both have Shi'ite majorities, but Iran is mainly Persian, while Iraqis are largely Arab and have historically rejected attempts to interfere in their affairs.

U.S. officials in Baghdad say they will play no role in Ahmadinejad's visit and that the U.S. military will not be involved in protecting him as he travels around.

When Ahmadinejad flew into Baghdad, his plane was controlled by Iraqi air controllers. But from his plane, Ahmadinejad would probably have seen the rows of American armoured vehicles and helicopters at a giant U.S. military base next to the airport.

And unlike the strict secrecy that surrounds visits by U.S. President George W. Bush to reduce the risk of an insurgent attack, Ahmadinejad's trip has been well-flagged. Also, unlike Bush, he will be spending the night.

Details of the schedule for the first day of his visit made public so far suggest he may not enter the U.S.-protected Green Zone that houses Iraqi ministries and the U.S. embassy.

Instead Ahmadinejad will hold talks at Talabani's house in and stay the night there, Iraqi officials said.

Two bridges near Talabani's home were closed as part of a major security operation to protect Ahmadinejad. Many roads were also closed, preventing some Baghdadis from getting to work.