Ahmadinejad called for an "arbitration council" to mediate in disputes and a fund to back development in NAM. 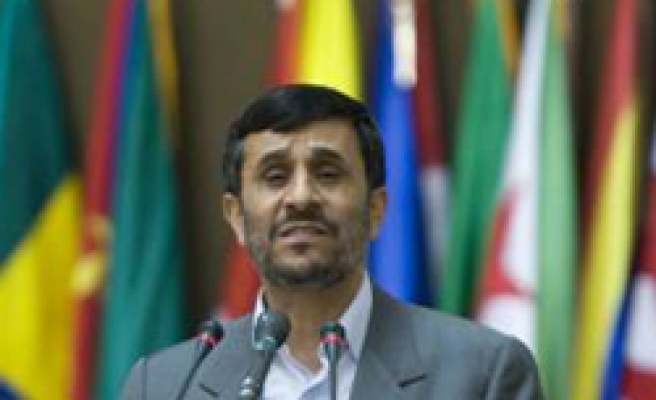 Iranian President Mahmoud Ahmadinejad said on Tuesday that the world was entering a new phase in which the Non-Aligned Movement (NAM) could turn into an alternative to the United Nations Security Council.

Ahmadinejad called for developing nations to unite against what he said was bias by the U.N. Security Council, which the Islamic Republic accuses of siding with the West in a nuclear row.

Iran wants to broaden international support for a peaceful drive to use nuclear technology.

President Mahmoud Ahmadinejad told ministers from the Non- Aligned Movement (NAM) in Tehran that the Security Council and other world bodies were being manipulated by some world powers.

He accused the powers of trying to deny others peaceful nuclear energy while they themselves stockpiled atomic weapons.

"The major powers are on a descending course. The extent of their influence drops day by day. They are approaching the end of their era," Ahmadinejad told the gathering.

NAM, now with 118 members plus observers, was set up in 1961 to group many newly independent nations which wanted to avoid being caught up in the Cold War between Moscow and Washington. It has struggled to stay relevant since the Soviet Union fell.

The movement has previously voiced support for Iran's peaceful use of nuclear energy and backed Tehran's cooperation with the U.N. watchdog, the International Atomic Energy Agency.

A draft statement, obtained by Reuters, echoed this position. Diplomats said the need for consensus meant NAM was unlikely to agree to any much stronger wording supporting Iran.

"Any measure to change the world conditions and realise the joint interests of member states will not be possible except through effective efforts and collective cooperation of member states," Ahmadinejad said in his address.

Ahmadinejad called for an "arbitration council" to mediate in disputes and a fund to back development in NAM. He said NAM could together stop "the violation by major powers" of others.

Ahmadinejad said the Security Council would never issue a resolution against the United States, like four other big powers, had a permanent seat. The permanent council members have veto powers.

"We only pray that Iran, together with the International Atomic Energy Agency, together with the ... big powers, sit down and resolve this matter amicably," Tanzanian Foreign Minister Bernard Membe told Reuters on the sidelines of the meeting.

A European diplomat, attending the meeting, said Iran had pushed for more explicit support for its nuclear cause but had met opposition from some NAM states, including Saudi Arabia and Egypt, with which Iran does not have full ties.

"It is going to be a soft declaration," the diplomat said of the nuclear statement.

One minister said NAM would voice "strong support" but did not explain what that would involve.

"Of course, Iran has the right to have nuclear energy but at the same time it has obligations like all of us to make sure that the IAEA knows what is going on," she added.