AK Party closer to center as Abdullatif Sener drops out

Prime Minister Recep Tayyip Erdoğan, speaking at a parliamentary group meeting of the Justice and Development Party (AK Party), stated that they are not engaging in restricted politics but that their party is a center party that is open to all segments of 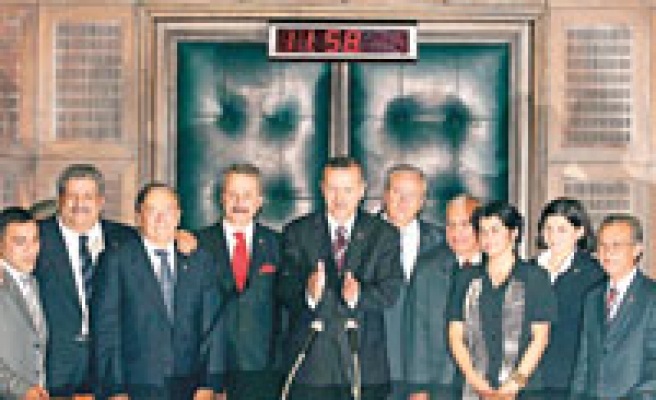 Prime Minister Recep Tayyip Erdogan, speaking at a parliamentary group meeting of the Justice and Development Party (AK Party) on Friday, stated that they are not engaging in restricted politics but that their party is a center party that is open to all segments of society.

Only a couple of hours after the prime minsiter's speech, in early evening, his deputy and State Minister Abdullatif Sener said he would not run for parliamentary elections this year, despite contradicting statements from AK Party officials who confirmed that Şener had already applied for candidacy during the earlier hours of the day.

"The AK Party is equidistant to every person living in this country, every legitimate idea, every belief, and every ideal, and it is a center party that defines itself not with respect to a specific faction in society but with respect to the entire society," the Prime Minsiter said in his speech.

Erdogan maintained that every road that leads the AK Party to the nation is their natural course and direction. They regard July 22 as an occasion for embracing or uniting the nation as they did on Nov. 3 and March 28. "We are enthusiastically waiting for this union. We know that our nation, too, awaits us with the same enthusiasm, and we see this in every city we visit.”Erdoğan continued, “Every day of the last five years of AK Party government, cold walls separating the state from the nation were torn down and the distance removed. History has recorded it all. Every page of this justice and development calendar has been written by us together with the nation.”

Referring to recent crises, Erdogan underscored the difference between those who produce new ideas and projects or undertake new services and investment, and those who create crises. “What is the difference? The AK Party has changed Turkey's route toward change, modernization and the contemporary world. The AK Party is searching for sincere politics within the vastness of Turkey,” he said.

Being a former social democrat politician who served both in the Republican People's Party (CHP) and the Social Democratic People's Party (SHP), UskUl emphasized the democracy-secularism connection in his speech. “Those who [claim to] fight for secularism should never forget this point: If you achieved a true democracy, this means that secularism has been secured as well. On the other hand, there are many secular countries that have authoritarian and totalitarian rule. Democracy is, in the first instance, a struggle for secularism. I hope that those who [claim to] fight for secularism will also create guarantees for a democratic regime,” he said.

Whether or not Deputy Prime Minister Sener would run for parliament remained shrouded in mystery until late afternoon.

Hayati Yazici, deputy chairman in charge of the AK Party's local organizations, yesterday announced that Şener had applied to the party for parliamentary candidacy. Shortly after this statement, however, Sener himself said, “I have not filed any such application.”

Sener: not a candidate, but a MYK member

Towards evening on Friday Sener made his position crystal clear, holding a press conference to announce that he had no intention of running in the general elections.

Observers say a chill recently seems to have descended on relations between the AK Party administration and Sener. During the vote on a constitutional amendment package on May 31, Sener was offended when journalists asked him whether he would run for Parliament. “You will see what will happen on June 4. Do not ask me such foolish questions,” he had said. Later, Prime Minister Erdoğan, when asked about Sener's candidacy, had stated that he had no knowledge of Sener's apparent reluctance to run in the elections.

Before the meeting of the AK Party parliamentary group yesterday, Sener had said he was not going to run for Parliament on July 22. “I have not filed an application for candidacy,” he said. Literally minutes later after his statement, Yazıcı announced that Sener had applied for candidacy only to later correct his words, saying, “Our election coordination center must have misled me,” he said.

Sener, who now has made up his mind about not running for Parliament, has occasionally fallen out with Erdoğan on some issues -- in particular after the transfer of responsibility for the Privatization Administration (OIB) from his portfolio to Finance Minister Kemal Unakıtan. Even if Sener does not run for Parliament, he is expected to keep his office as a member of the party's Central Executive Board (MYK). Sener reportedly has serious differences of opinion with the election coordination center of his party concerning deputy candidates in Sivas. He is said to have been disappointed when his opinions over his party's candidate selection process were not taken into consideration, despite him having been active in this respect in the previous elections. Erdogan is expected to have a special meeting with him in the next few days.