AKP gets 41% support despite mass protests

Despite the mass protests, the AKP polled 41% support in a recent survey - by far the most popular parth in the country, says BBC's Sarah Rainsford. She analyses Izmir rally and AKP. 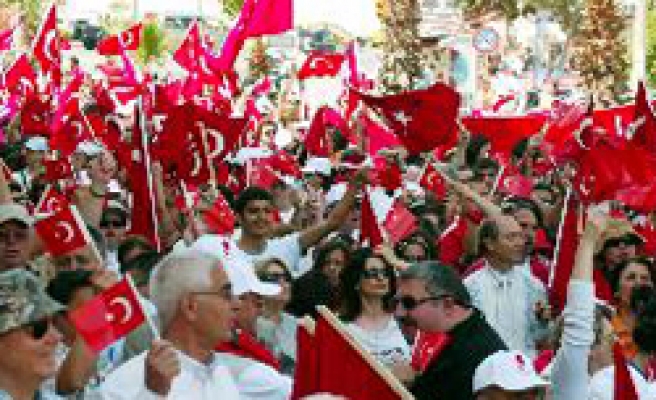 "A feast of democracy!" That is how one newspaper described the mass demonstration in support of secularism in the port city of Izmir at the weekend.

"The people will prevail!" pronounced another. They all carried front page pictures of the city seafront packed to overflowing with protesters.

Some estimates put the number at more than one million. It was the fourth major "Rally for the Republic" in as many weeks - a wave of protests sparked when the government nominated Foreign Minister Abdullah Gul for president.

Like many prominent members of the governing AK Party, Mr Gul once belonged to a pro-Islamic party.

Despite a strong democratic reform record in government, his critics do not believe his views have changed.

"This demonstration sent a message to the government that has closed its eyes to us," organiser Ozgun Kosaner said on Monday.

"Turkey is united around the principles of Ataturk and we won't take a step back," he said, referring to the general who created modern Turkey and enforced a strict division between religion and politics.

This month's secularist street protesters can already claim one victory. Abdullah Gul was forced to withdraw from the election of the president by parliament after opposition politicians blocked his path.

They were helped by a "midnight memorandum" from the military - dubbed an e-coup by some - clearly stating that the powerful generals would not accept Mr Gul as president.

Now the governing AKP and Turkey's secular establishment are locking horns for a new battle to control the next parliament.

An early general election is set for 22 July. "People think this is their last chance to save the Republic," says Ozgun Kosaner in Izmir.

That sense of urgency was reflected at the latest secularist demonstration he helped organise on Sunday.

Joined by political leaders from the centre-left of Turkish politics, the crowd called on them to set aside individual ambition and "Unite!"

"A stronger opposition would help prevent the AKP forming a single-party government, and imposing its choice of president," says journalist Yusuf Kanli.

"If three or more parties make it over the 10% vote threshold and into parliament it's unlikely the winner can rule alone."

Two centre-right parties have already merged in response to the current crisis. The left remains divided. So does the country.

Despite the mass protests, the AKP polled 41% support in a recent survey - by far the most popular party in the country.

And on Saturday it was out to prove it. Prime Minister Recep Tayyip Erdogan led Foreign Minister Gul and 11 cabinet ministers to Erzurum in the east for a show of force of their own.

"Like a military landing," one news website quipped. City billboards were pasted with images of Mr Erdogan and the AK Party, and here too the main square turned red as up to 100,000 people turned out, waving the national flag.

"The Turkish Republic is a democratic and secular state based on the rule of law," Mr Erdogan bellowed at them through a microphone.

That phrase is sure to be much repeated as the AKP fights off the label of regime-threat applied by the military.

"Ataturk and Sezer were elected president the same way," the prime minister fumed on stage.

"But when it came to Abdullah Gul we were told: 'No way!'" Ahmet Necdet Sezer is the current president.

The AKP hopes to win support from those who believe democracy was trampled in the battle to keep Mr Gul from the presidency.

It is also likely to keep the votes of more conservative constituents who nonetheless maintain their support for secularism.

Acting like grown-ups If the secular establishment can muster millions of supporters on the streets, the government also claims a popular mandate.

So the AKP is rushing reforms through parliament that could see the president elected directly by the people.

"When parliament is blocked, then it's up to the people to speak out!" Abdullah Gul told a rapturous crowd.

An AKP candidate would have a strong chance of winning a public poll for president. That prospect, or a new parliament where the AKP is dominant again, could set the scene for further confrontation - potentially more serious.

"If the military sees a 'hazardous' person heading for the presidency it will not sit back and accept it," worries Yusuf Kanli, though he believes public support for such action is far weaker than 10 years ago.

"Turkey is at a very crucial stage in its democratic development."

"We need reconciliation now between all sides or else someone will step in and blow the whistle and that is too dangerous," he says. "After all we have lived through, we have to start acting like grown ups."