Gore, one of the most prominent figures in the U.S. Democratic party and known around the world for his push to combat climate change, publicly backed Obama for the first time at a huge rally in Detroit. 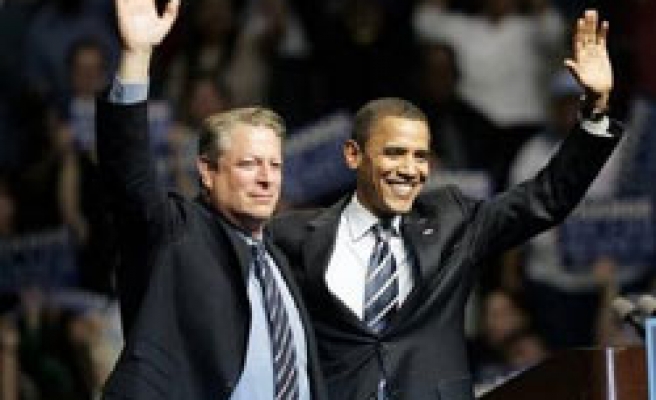 Former Vice President Al Gore pledged on Monday to do all he could to help Barack Obama win the White House, saying it was crucial the United States has not only a new leader but a new vision for its future.

Gore, one of the most prominent figures in the U.S. Democratic party and known around the world for his push to combat climate change, publicly backed Obama for the first time at a huge rally in Detroit.

He recalled his own presidential bid in 2000 to urge his party to support the Illinois senator in the November election against Republican John McCain.

"Take it from me, elections matter," said Gore, who lost the election to President George W. Bush eight years ago amid a dispute over the vote in Florida. Gore won the popular vote nationwide but Bush emerged the winner after the Supreme Court ruled in his favor on the disputed Florida balloting.

At the Detroit rally of about 20,000 people, Gore strongly criticized Bush and said McCain's policies were too similar to those of the current president.

Highlighting Bush's decision to invade Iraq in 2003, Gore said he and Obama spoke out publicly against the war in the months leading up to it.

"After eight years of the worst, most serious foreign policy mistakes in the entire history of our nation, we need change," Gore said.

"We've got to have new leadership ... not only a new head of state but new vision for America's future."

Gore likened Obama to assassinated President John F. Kennedy and told of having stood in the snow when he was 12 years old to watch Kennedy's inauguration in 1961.

"I know what his inspiration meant to my generation and I feel that same spirit in this auditorium," he said.

Gore has focused his career since the 2000 election on fighting climate change, writing a book and starring in a documentary on the subject. He won the Nobel Peace Prize in 2007 for his efforts against global warming.

Gore wrote a letter to his supporters urging them to contribute to Obama's campaign.

"From now through Election Day, I intend to do whatever I can to make sure (Obama) is elected president of the United States," Gore said in the letter.

"It means a lot obviously," Obama told reporters when asked earlier in the day about Gore's support.

"We've had ongoing conversations about a whole host of issues. A lot of them have revolved around issues of climate change and energy and the environment. He's provided good political advice."