The teacher discovered the object while volunteering in the Galaxy Zoo project, which enlists the help of members of the public to classify galaxies online. 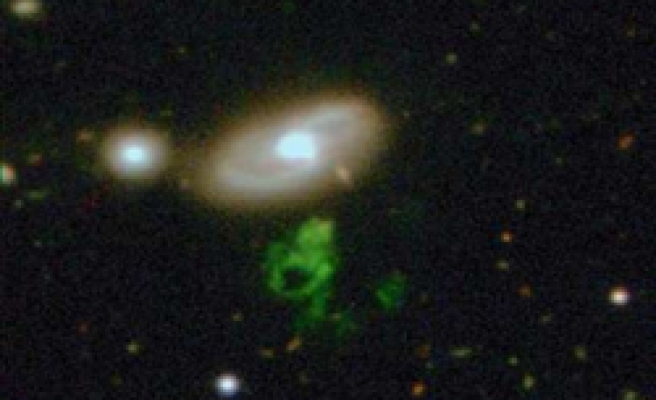 A Dutch primary school teacher and amateur astronomer has discovered what some are calling a "cosmic ghost," a strange, gaseous object with a hole in the middle that may represent a new class of astronomical object.

The teacher, Hanny van Arkel, discovered the object while volunteering in the Galaxy Zoo project, which enlists the help of members of the public to classify galaxies online.

"At first, we had no idea what it was. It could have been in our solar system, or at the edge of the universe," Yale University astrophysicist Kevin Schawinski, a member and co-founder of the Galaxy Zoo team, said in a statement.

The find, nicknamed "Hanny's Voorwerp" (Dutch for object), soon had scientists training their telescopes on the object.

"What we saw was really a mystery," Schawinski said. "The Voorwerp didn't contain any stars."

Made entirely of very hot gas, the eerie green object is illuminated by remnant light from the nearby galaxy IC 2497.

"We think that in the recent past the galaxy IC 2497 hosted an enormously bright quasar," Schawinski said.

He said light from the past still illuminates the ghostly object, even though the quasar shut down some 100,000 years ago and the galaxy's black hole went quiet.

"It's this light echo that has been frozen in time for us to observe," said Chris Lintott, a co-organizer of Galaxy Zoo at Oxford University in the United Kingdom, said in a statement.

Researchers will soon use the Hubble Space Telescope to get a closer look.
"It's amazing to think that this object has been sitting in the archives for decades and that amateur volunteers can help by spotting things like this online," van Arkel said in a statement.

Van Arkel is one of more than 150,000 amateur astronomers who have assisted in classifying more than 1 million galaxies over the past year as part of the Galaxy Zoo project.

The next stage of Galaxy Zoo will ask volunteers to search for more unusual astronomical objects.