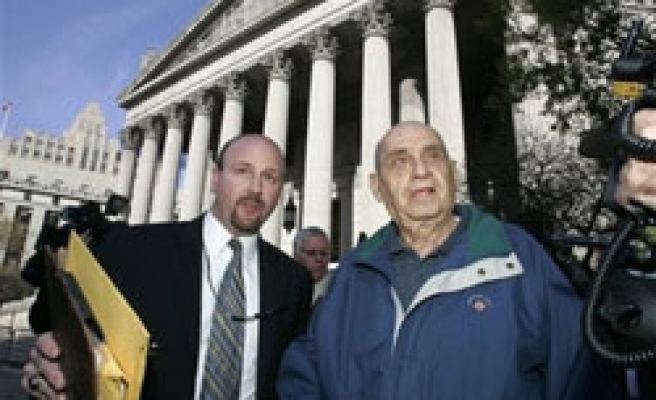 The United States arrested an 84-year-old American on Tuesday suspected of giving Israel secrets on nuclear weapons, fighter jets and missiles in the 1980s, in a case linked to the Jonathan Pollard spy scandal that rocked U.S.-Israeli relations.

The arrest of Ben-Ami Kadish indicates that Israeli spying revealed by the Pollard case, still an irritant to the U.S. alliance with Israel, may have spread wider than previously acknowledged.

"It was bigger than we thought, and they hid it well," said former U.S. Attorney Joseph diGenova, who prosecuted Pollard.

Kadish acknowledged his spying in FBI interviews and said he acted to help Israel, according to court documents.

He was accused of reporting to an Israeli government handler who was also a main contact for Pollard, an American citizen serving a life term on a 1985 charge of spying for Israel.

State Department spokesman Tom Casey said, "We will be informing the Israelis of this action ... 20-plus years ago during the Pollard case we noted that this was not the kind of behavior we would expect from friends and allies, and that would remain the case today."

Authorities said Kadish was arrested in New Jersey on four counts of conspiracy and espionage after an investigation that began in 2005. The first spy charge carries a possible death sentence.

Kadish made an initial appearance at Manhattan federal court. Looking frail and shuffling, Kadish smiled briefly at the judge who ordered his release on $300,000 bail and restricted his travel.

Kadish did not speak, and his lawyer made no comment upon leaving.

Israeli Foreign Ministry spokesman Arye Mekel said of the arrest: "We know nothing about it. We heard it from the media."

Pollard pleaded guilty in 1986. Israel gave him citizenship in 1996 and acknowledged in 1998 the former U.S. Navy intelligence analyst was one of its spies. Israel has unsuccessfully sought Pollard's release.

Kadish is a Connecticut-born U.S. citizen who worked as a mechanical engineer at the Army's Picatinny Arsenal in Dover, New Jersey.

His spying lasted roughly from 1979 to 1985, and his contact with the unidentified Israeli handler continued until March of this year, the federal complaint against him said.

Based on circumstances of the case, DiGenova identified Kadish's contact as Yosef Yagur, who has been linked in court documents to the Pollard case. A Justice Department spokesman said he could not confirm that.

The complaint cited Kadish as saying that, unlike Pollard, he received no money from the Israelis.

Kadish used his security clearance to borrow 50 to 100 classified documents from the arsenal's library, the complaint said. He worked from a list provided by the handler, identified in court documents as "CC-1." The contact photographed the documents in Kadish's basement.

One classified document Kadish passed on "contained information concerning nuclear weaponry," the complaint said. Israel is believed to have nuclear weapons but has never acknowledged it.

Another document related to a modified version of an F-15 fighter jet that the United States had sold to an unidentified other foreign country, the complaint said.

A third pertained to the U.S. Patriot missile air defense system. The U.S. military first deployed the system in 1984, and Israel used the system to defend against Iraqi missiles in the 1991 Gulf war.

The complaint said Kadish kept contact with CC-1, met him in Israel in 2004, and spoke with him by telephone on March 20 of this year, after his first FBI interview. It said the handler told him to lie to U.S. authorities: "Don't say anything ... What happened 25 years ago? You don't remember anything," CC-1 was quoted as saying.

The complaint said the handler worked as the Israeli consul for science affairs at its Consulate General in New York from 1980 to November 1985.

During the late 1970s, he worked for Israeli Aircraft Industries, an Israeli government contractor, the complaint said. It said the handler left the United States when Pollard was arrested and had not returned.

The details fit Yagur's history. A woman who identified herself as Yagur's wife, when reached by telephone in Israel, said: "We're not speaking to journalists. Goodbye."