Fears stoked by the post-9/11 "war on terror" are increasingly dividing the world, Amnesty International said Wednesday, while rapping rights abuses from China to Darfur and Russia to the Middle East. 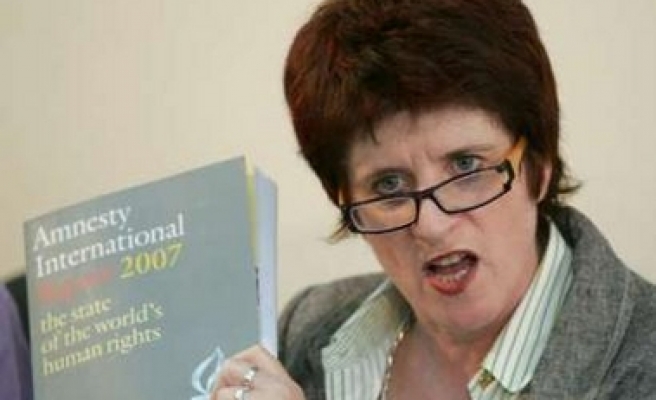 Fears stoked by the post-9/11 "war on terror" are increasingly dividing the world, Amnesty International said Wednesday, while rapping rights abuses from China to Darfur and Russia to the Middle East.

The United States is treating the globe like one giant battlefield for its war on terror, eroding rights worldwide, the human rights group said

Amnesty International's Secretary-General Irene Khan said the United States and its allies' behavior was setting a destructive example for other nations, and that countries across the world were using the war on terror as an excuse to violate human rights and stifle dissent.

"One of the biggest blows to human rights has been the attempt of Western democratic states to roll back some fundamental principles of human rights — like the prohibition of torture," Khan told The Associated Press, speaking before the launch of her organization's annual report on the global state of human rights.

The report condemned the United States' response to international terrorism, saying it had done little to reduce the threat, while deepening mistrust between Muslims and non-Muslims and undermining the rule of law. The Bush administration's policy of extraordinary rendition — the alleged practice of secretly flying terror suspects to countries where they could be tortured — came in for particularly scathing condemnation.

"The U.S. administration's double speak has been breathtakingly shameless," the report said. "It is unrepentant about the global web of abuse it has spun in the name of counterterrorism."

"If we focus on the U.S. it's because we believe that the U.S. is a country whose enormous influence and power has to be used constructively," she said. "When countries like the U.S. are seen to undermine or ignore human rights, it sends a very powerful message to others."

European countries were attacked for failing to challenge the U.S. rendition scheme, while U.S. allies Britain, Australia, and Japan were singled out for passing harsh new anti-terror or anti-immigration laws.

Fear of no person safe

"The politics of fear is fueling a downward spiral of human rights abuse in which no right is sacrosanct and no person safe," said Amnesty International chief Irene Kahn.

"The 'war on terror' and the war in Iraq, with their catalogue of human rights abuses, have created deep divisions that cast a shadow on international relations," making it harder to resolve conflicts and protect civilians.

The 320-page report, covering rights abuses worldwide in 2006, focused particular attention on violence against women, as well as torture, terror and the death penalty, which Amnesty fiercely opposes.

While noting that 144 states have ratified the UN Convention Against Torture, it documented abuse and ill-treatment by security forces in 102 states worldwide.

The US detention camp at Guantanamo Bay came in for particular criticism: Amnesty said 400 detainees from more than 30 countries are still held in what it called "the public symbol of the injustices in the 'war on terror.'"

As for violence against women, it said one in three women is subjected to intimate abuse by a partner during their lifetime, while 70 percent of casualties in recent conflicts are civilians -- mostly women and children.

Regional conflicts around the globe provide the context for much of the abuse documented in the report.

Israel-Lebanon conflict a shame on UN

Last year's war between Israel and Lebanon brought shame on the international community, with the United Nations taking "weeks ... to muster the will to call for a ceasefire" in a conflict which saw 1,200 civilians killed.

Russia has seen "widespread" hate crimes against foreigners, while Roma suffer "rampant" exclusion around Europe "illustrating the blatant failure of leadership to combat racism and xenophobia."

Elsewhere the report condemned clampdowns on human rights defenders in China, Zimbabwe and Iran, "repression" in Egypt, and a "potential threat" to free speech in the form of new counter-terrorism laws in Britain.

Specifically, the report identified "an arc of instability" extending from the borders of Pakistan to the Horn of Africa, where armed groups were flexing their muscles.

"Unless governments address the grievances on which these groups feed, unless they provide effective leadership to bring these groups to account ... the prognosis for human rights is dire," said Khan.

But the US-led "war on terror" provided an over-arching theme of the report's criticism.

"Five years after 9/11, new evidence came to light in 2006 of the way in which the US administration treated the world as one giant battlefield for its 'war on terror,'" said Khan, singling out "extraordinary renditions" which also implicated countries including Italy, Pakistan, Germany and Kenya.

"Ill-conceived counter-terrorism strategies have done little to reduce the threat of violence or ensure justice for victims of terrorism but much to damage human rights and the rule of law globally," she added. Last Mod: 23 Mayıs 2007, 16:43
Add Comment