An introduction to Istanbul

Last year, when the Boston Dialogue Foundation, a progressive Islamic group from Revere, Massachusetts, offered to send me to Turkey, I was thrilled, but felt some trepidation. 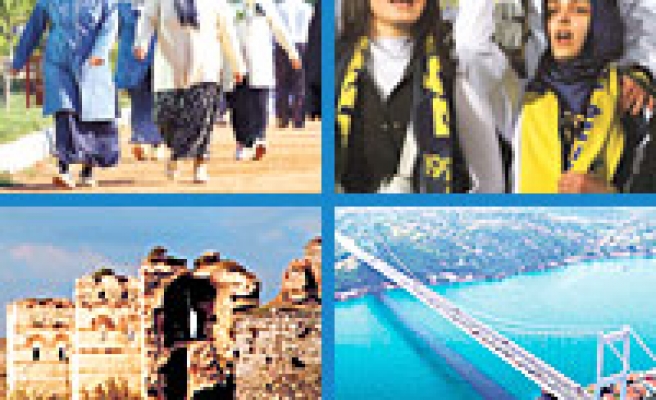 With Turkey being so much in the news now, I’m glad I went. It seems like a good time for me to report on what I learned about Turkish politics and the religion that had been successfully (though temporarily) buried beneath the rubble of the Ottoman Empire.
The reason for my hesitation to visit Turkey came from my personal family history. Until this opportunity arose I never realized that I held a stereotype of the Turks, equating them with military ferocity. Born in Boston as a third generation Lebanese of Muslim faith, the stories I heard about my grandparents coming to America at the turn of the 20th century always fascinated me. My favorite story was about my maternal grandfather, who left his beloved Mount Lebanon to avoid the Turks’ conscription of young Syrians to quash uprisings against the Ottoman Empire. He hadn’t the heart to shoot anyone. So my grandfather, dodging the violence he found so odious, headed for America at the age of 22.

Then there was my Uncle Turk -- my father’s brother. “Turk” played football at Colby College about 60 years ago. When I discovered that he earned his sobriquet because of the mayhem he caused on the football field, the image of the “ferocious” Turk was fully formulated in my mind.

The first time I studied the Ottoman Empire was at Harvard, in a course on the history of the Middle East. For seven centuries Constantinople, the dazzling jewel of the East, had withstood attacks from the Islamic Empire. When the Ottomans captured Constantinople they earned a worldwide reputation for being the toughest warriors of that era. This infamous act was probably enhanced even further by the popular Four Lads song from the 1950s: “You can’t go back to Constantinople, no you can’t go back…it’s nobody’s business but the Turks.” The way the media is sensationalizing Turkey’s latest democratic elections (anything to bolster the threat of Islam), I wouldn’t he surprised if this song made a comeback.

The amazing story of the defeat of Constantinople is displayed at the military museum in İstanbul, an absolute must-see. There is a life-size figure of the handsome conqueror, Mehmet, sitting on a white steed. Beside him stands an elderly man with a long white beard, leaning on a cane. This was Mehmet’s spiritual advisor. Together they shocked the world in 1453. Mehmet was 21-years-old at the time. It struck me that there was probably always a special place in the heart for religion in Turkey.

Turkey has a fascinating set of political problems. The media depicts it as being at a crossroads. One road ends with radical Islamists who wish to implement Islamic law in Turkey and compel all women to cover their heads (when and if they are allowed out of the house). The other road ends with radical secularists who have oppressed Islam to such an extent that it is against the law for women to wear the headscarf in government buildings -- like the military museum -- or at university, even if Islam is their chosen faith.

Although I cannot speak with any authority on the political strife in Turkey, I want to share with you some of my observations. For example my experience at the military museum actually began in the parking lot, when a young Muslim in a military uniform bent his head down into our car, pointed at me, and said in Turkish (I think), “Take off that headscarf.” My gracious Turkish hosts had fully prepared me for this moment. But as an American, I confess that I did not like being told what to wear and what not to wear. So while this “take-it-off” policy is central to the concept of the separation of church and state in Turkey, I thought, pompously, they could take a lesson from America on the importance of religious freedom.

Many secularists would say that to speak of religious freedom in Turkey is to be totally naïve. But as a Muslim scholar and student of Turkish history, I am not that naïve. I understand all too well that the radical Islamists are a very real threat to secular society. What I would like to know, however, and what I cannot learn from the news (the media being obsessed with exaggerating the threat of Islam), is who, among the members of the popular Islamist parties, are the radicals and who are just good religious folk, like so many politicians belonging to the Christian Democrat Party in Germany, for example.

To speculate on how the Turks should shape government policies in a secular state, given the challenges they face from a diverse society, Americans should at least learn that all Muslims are not the same, and that Islam is not a monolith. For example, I had the privilege of meeting some career-minded college girls who prefer to wear the headscarf as a statement of their newfound religious identity. I was pained to see these girls standing outside the university gates, forced to uncover their heads, or risk being thrown out of the government-owned university. Since they were being perceived by the state as a threat, I decided to conduct a small survey among the girls.

I already knew that the radical Islamists in Turkey preferred an Islamic state to a secular one, and that they encouraged the college girls to wear the headscarf, using them to make a political statement, and forging a symbolic connection between the headscarf and those who threaten to overthrow the secular state. I didn’t imagine that in the kind of society envisioned by these radicals, a girl would be allowed to go to college, prepare for a career or even work. Thus given that the goals of the radical Islamists and the headscarf girls did not appear to be entirely the same, there was only one question I wanted to ask the girls. Were they wearing a headscarf because they wanted to live in an Islamic state? They said absolutely not. They did not want to live in an Islamic state where they might be prohibited from attending college, or, for that matter, leaving the house. They only wanted to be free to practice their religion; they resented the totalitarian, rigid interpretation of Islam associated with radical ideologies, the abysmal tribal mentality, the backward culture of oppressing women, the harsh punishments and the absence of freedom.

While the idea of having a “state religion” is positively unthinkable to me as well, I understood from my small survey that many good people, whose religion happens to be Islam, are caught somewhere in between two radical ideologies: Islamism and secularism. Unfortunately only the words of radicals are being heard in the news today. But what I think is playing out on the stage in Turkey is the natural evolution of Islam, changes that transpired in Judaism and Christianity thousands of years ago. Islam is rising up from under the distortions of acculturation (i.e., the “old” country) and casting off the strident, anachronistic ideology it has become in most Muslim countries. With secular Turkey at the vanguard, Islam can become what it was meant to be as a religion, carrying its message of a loving God, a Day of Judgment and a healthy respect for humankind.

My trip to Turkey reinforced my own understanding of Islam, free of acculturation, and similarly advanced independently in a secular America. This is the religion I learned from my parents and grandparents in the West. What I found so endearing about Turkish Islam is expressed in the words of one of the founders of modern religious thought, Fethullah Gülen, who said, “Loving and respecting humanity merely because they are human is an expression of love and respect for the Almighty Creator.” For me these words encapsulate the ethos of modern Turkey and my religion, Islam.

Turkey is at a crossroads in every sense of the word. İstanbul, for example, is a city with a river running through it. The bridge that crosses the Bosporus has signs at both ends: “Welcome to Europe” and “Welcome to Asia.” I was impressed with İstanbul, not only because its chilly winds and watery vistas reminded me of San Francisco, but because it seemed to me, as an American Muslim, to engender the best of both worlds where Western humanistic values and modern Islamic thought can coexist. It felt natural to stand astride two worlds, to inhabit both, or perhaps, neither -- just like it says in the Koranic verse that speaks about religion as being neither of the East nor of the West (24:35).

One parting word on Turkish politics from a fashion-minded observer -- I would like to recommend a way to help the headscarf girls out of their unwanted dilemma and design a fabric for a headscarf with the following written on it: “Yes, religious freedom.” “No, state religion.” Then hold a political rally for religious freedom and wear it!