Hugo said this recently about George: "The imperialist, mass murdering, fascist attitude of the president of the United States doesn't have limits. I think Hitler could be a nursery baby next to George W Bush." 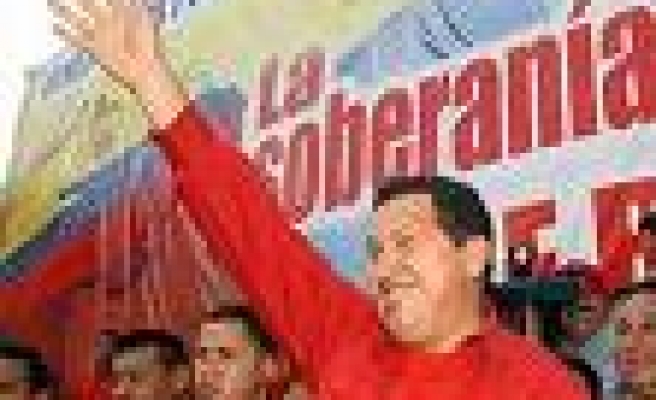 Why Caracas? Because at the moment it is the heart - the very epicentre - of Latin anti-Americanism.

Venezuela is unusual, indeed unique. It is a Latin American nation which in recent years has become rich enough to have the power to tell the US to take a hike. And Hugo Chavez, the democratically elected leader, loses no opportunity to do just that.

In the early part of this century, he became one of the ringleaders of the worldwide anti-American movement.

Hugo said this recently about George: "The imperialist, mass murdering, fascist attitude of the president of the United States doesn't have limits. I think Hitler could be a nursery baby next to George W Bush."

You've got to wonder if there is any end to the capacity of the rest of the world to blame the United States for its problems. Nowhere is that more the case than in Latin America, where out of roughly 500 million people, 200 million live on less than $2 a day.

In other words, in Latin America as elsewhere in the world, is anti-Americanism a smoke screen, a very convenient smoke screen, whose noxious fumes hide the reality of local failure?

As Otto Reich, a former Bush administration ambassador to Venezuela and public enemy number one (or two?) among many anti-Americans, told us: "The United States is the scapegoat. It provides an easy excuse for the failures: if something isn't working, blame the Americans. Scratch the surface of some of these anti-Americans and you find self-loathing."

What a Chavista like Eva Golinger will tell you is that that kind of comment is typical of American "prepotencia" - arrogance.

Ms Golinger, a Venezuelan and US citizen raised in New York, says: "Hugo Chavez is a threat to the United States government but not in the way Washington portrays him, as a threat to democracy. He is a threat to US domination."

Focusing on the negative

For Mr Chavez and his backers, Latin anti-Americanism is rooted in what the US has done - not in French-style metaphysical hoity-toityness. Latin Americans say - with some justification - that their neighbour to the north has behaved badly in the past.


Augusto Montiel says the US likes to see itself as the world's watchdog
And the Chavez team says the US is still at it.

"There is a culture in the United States about being the world's watchdog," says Congress member Augusto Montiel. "They call it free trade when you shut up and against your dignity, your sovereignty, you lower your head and say 'yes' we will give you everything. That is not democracy, my friend, that is dictatorship."

One of the great features of the anti-American mindset is the blotting out of the positive and the accentuating of the negative. Yes Washington has been concerned first and foremost with US self interest, but much of South America's infrastructure - its social services such as they are - is in place because the Yankees put it there.

Trade between north and south is huge: Venezuela alone sells $39bn worth of oil a year to the United States. And millions and millions of Latin Americans benefit every day from the powerhouse US economy - from relatives cleaning cars in Los Angeles, making beds in Las Vegas and picking fruit in rural Georgia. They send money home to places where economic development is stymied by corruption and government interference.

Which leads me to wonder: if American behaviour changes now, or if free trade turns out to make everyone wealthier, will Latin Americans change their minds about the modern US?

That, it seems to me, is one of the challenges for Latin America: will it reward US support and good behaviour in the future with a toning down of the rhetoric?