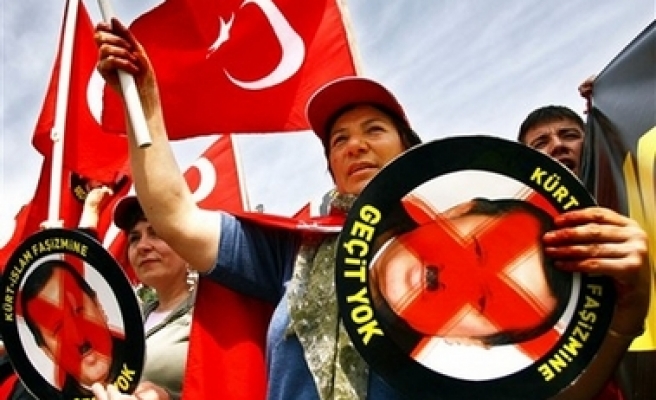 "Turkey is secular and will remain secular," shouted thousands of flag-waving protesters, who traveled to Istanbul from across the country overnight.

The rally was organized more than a week ago but it came a day after Prime Minister Recep Tayyip Erdogan's government rejected a stern warning from the military over the country's presidential election, calling its interference unacceptable in a democracy.

The ruling party candidate, Foreign Minister Abdullah Gul, failed to win a first-round victory Friday in a parliamentary vote marked by tensions between opposition and government. Most opposition legislators boycotted the vote and challenged its validity in the Constitutional Court.

The military said Friday night it was gravely concerned and indicated it was willing to become more openly involved in the process . But some interpreted it as an ultimatum to the government.

The statement is considered to reflect the inability of the Turkish Armed Forces (TSK) to adopt the results of democratic processes as it was posted only five hours following the conclusion of the first round of presidential elections.

Gul has promised to uphold the country's secular traditions.

Turkey has enjoyed relative economic and political stability for years and is seeking entry into the European Union.

Also the EU has been pressing Turkey to curb the influence of its armed forces in politics. Last Mod: 29 Nisan 2007, 15:48
Add Comment