Anti-Muslim bias rising in US: CAIR

The number of civil rights complaints by Muslims in the United States jumped 25 percent in 2006, mainly because of a surge in immigration and citizenship problems, a leading US Muslim group said. 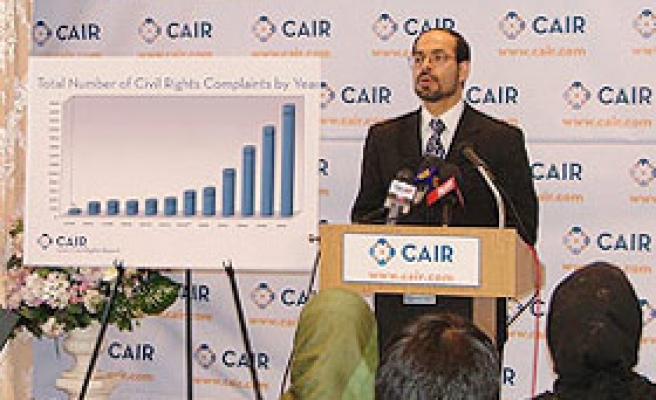 The number of civil rights complaints by Muslims in the United States jumped 25 percent in 2006, mainly because of a surge in immigration and citizenship problems, a leading US Muslim group said yesterday.

Hate crime complaints, including physical attacks against individuals and mosques, rose 9.2 percent to 167 in 2006, compared with 153 a year earlier, the Washington-based advocacy group said in the report.

"Instead of 120 days, it's taking five years," said Nihad Awad, CAIR's executive director. "If the government has to take five years for security measures, that's a major blow for our people."

"This is the first time since 2004 that government agencies represented the highest percentage of complaints," the council said in the 40-page report, "The Status of Muslim Civil Rights in the United States."

Muslims aren't the only immigrants affected, said CAIR legal director Arsalan Iftikhar, but "there is a disparate impact on people from Muslim and Arab nations who are affected by this."

The long waits make it difficult for immigrants to travel abroad and apply for government jobs, such as language interpretation.

Muslims across the country have filed hundreds of lawsuits against the Federal Bureau of Investigation, claiming the agency is unnecessarily delaying completion of their background checks. Most of the 62,000 names sent to the FBI each week -- half of which are for citizenship requests -- do not trigger alarms. Of those that do, the FBI must cross-check the names against additional databases, a process that can take years.

In February, the American Civil Liberties Union filed a class-action lawsuit in California against the federal government, saying "its practice of indefinitely delaying citizen applications" violated due process rights.