Foreign Minister Rais Yatim said he would summon the Turkish ambassador on Monday for what he said was interference in Malaysia's internal affairs. 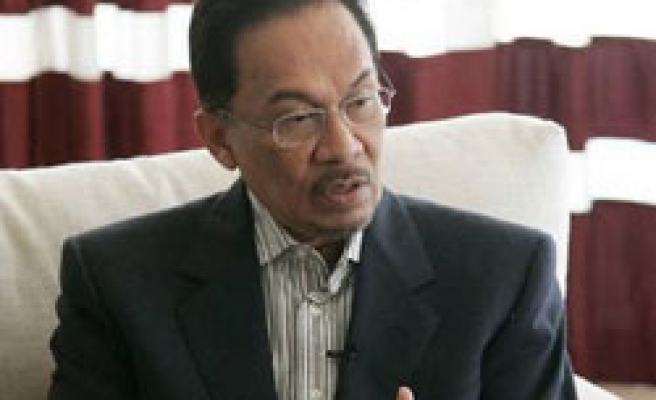 Malaysia's main opposition leader Anwar Ibrahim remained holed up in the Turkish embassy on Monday, seeking refuge from sodomy accusations he says were cooked up by the government.

The sensational developments, almost a repeat of the country's worst political crisis 10 years ago, will further roil waters that have been muddied since elections on March 8 dealt Prime Minister Abdullah Badawi's National Front coalition the worst electoral drubbing in Malaysian history.

The key stock index fell 0.6 percent in early trading on the news that can only add to an uncertain outlook that will likely cloud policy-making.

"One thing for sure, Anwar will not fade away at first instance on this new charge and he won't go away quietly," Informa Global Markets wrote in a note."And it may not necessarily strengthen the government's position."

Anwar, 60, fled to the Turkish embassy in a Kuala Lumpur suburb 12 hours after the accusations surfaced saying he had received death threats.

"He is still at the embassy," said Tian Chua, the spokesman for his People's Justice Party. "His lawyers are filing a summons in the court today over the police report made against him." He did not elaborate.

Anwar moved to the embassy at the invitation of the Turkish ambassador. His aides said several embassies made similar offers but Anwar chose Turkey because he is an economic adviser to the Turkish government.

Foreign Minister Rais Yatim said he would summon the Turkish ambassador on Monday for what he said was interference in Malaysia's internal affairs.

The developments come at a time of heightened political and financial uncertainties in Malaysia.

Anwar, who was sacked as deputy prime minister in 1998 in the midst of the Asian financial crisis and later jailed for sodomy and corruption, has seen a revival of his fortunes since the opposition alliance's strong showing in the March election.

The alliance won control of five of Malaysia's 13 states and denied the National Front coalition of its traditional two-thirds majority.

Anwar maintains that he has lined up enough defections from the ruling coalition -- he needs 30 -- to bring down Abdullah's government and said he would do so in mid-September.

The father of six children said in a statement the charges were "completely fabricated" and politically motivated.

"I have been told that my assassination has not been ruled out as a means to subvert the people's will and bring an end to the transformational changes taking place in Malaysia," he added in the statement.

Prime Minister Abdullah said on Sunday the government was not involved.

Federal criminal investigation chief Bakri Zinin said the alleged victim had been taken to hospital, but declined to give his name.

Anwar's advisers said the man could be a "plant" by "certain personalities to make the vicious attack against Anwar."

So far, there have been no major street protests. About 100 of his supporters gathered outside the Turkish embassy on Sunday, watched by a handful of riot police. They chanted "Reformasi", the movement's battle cry, and "down with the oppressive government".

Police have warned Anwar's supporters against holding any public protests. His sacking in 1998 brought tens of thousands onto the streets.