The developments come at a time of heightened political tension in Malaysia after the government's worst ever election result earlier this year put pressure on Prime Minister Abdullah Ahmad Badawi to quit. 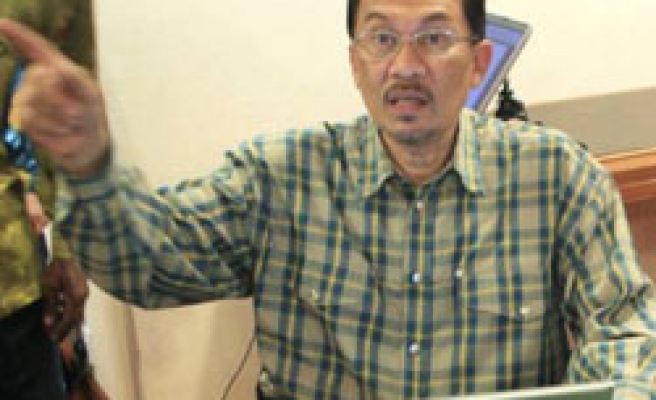 Malaysia's de facto opposition leader Anwar Ibrahim took refuge at the Turkish embassy on Sunday due to fears he could be assassinated after fresh accusations of sodomy.

The developments come at a time of heightened political tension in Malaysia after the government's worst ever election result earlier this year put pressure on Prime Minister Abdullah Ahmad Badawi to quit.

Anwar, who was sacked as deputy prime minister in 1998 and later jailed for sodomy and corruption, has seen a revival of his fortunes since the opposition alliance's strong showing in the March election. Anwar has said the old charges were trumped up, and said the new accusations were politically motivated.

"I was transported to the embassy earlier this morning fearing that my personal safety was in danger," Anwar said in a statement.

"I have been told that my assassination has not been ruled out as a means to subvert the people's will and bring an end to the transformational changes taking place in Malaysia," he said.

Anwar says he has won enough support from ruling coalition lawmakers to form a new government by September, which has sparked fears of policy shifts and unsettled investors.

"With grumblings within the ruling coalition, most probably Abdullah's days are numbered," said political analyst Yahya Ismail. "So the government must find ways to cripple the opposition."

Federal criminal investigation chief Bakri Zinin said the man who lodged the charges had been taken to hospital, but declined to give his name.

A statement from Anwar dismissed the charge as "complete fabrication".

About 100 of his supporters gathered outside the Turkish embassy, watched by a handful of riot police. They chanted "Reformasi", the movement's battle cry, and "down with the oppressive government".

Police have warned Anwar's supporters against holding any public protests. His sacking in 1998 brought tens of thousands onto the streets.

"If you create havoc, we will deal with you," Bakri said.

Anwar accused the ruling Barisan Nasional coalition of trying to ruin him, and his wife said she had photographic evidence showing the complainant was linked to an aide of Deputy Prime Minister Najib Razak.

"This is the second political conspiracy," Wan Azizah Wan Ismail told reporters. "It's a political murder against my husband."

Abdullah dismissed Anwar's claims. "Barisan Nasional has no intention of wanting to make life difficult for him or to harass him," the prime minister told reporters in the administrative capital of Putrajaya after launching an environmental project. "There is no such intention."

A spokesman for Najib declined to comment because of the ongoing investigations.

Barisan suffered its worst electoral setback in 50 years in March when it lost its two-thirds parliamentary majority and ceded five states to the opposition.

Public anger against rising prices and the ruling coalition's dismal showing in the poll have fuelled calls for a change in leadership.

The opposition alliance needs just 30 more seats to win a simple majority and form a new government. It won a record 82 seats in the 222-seat lower house of parliament in March.