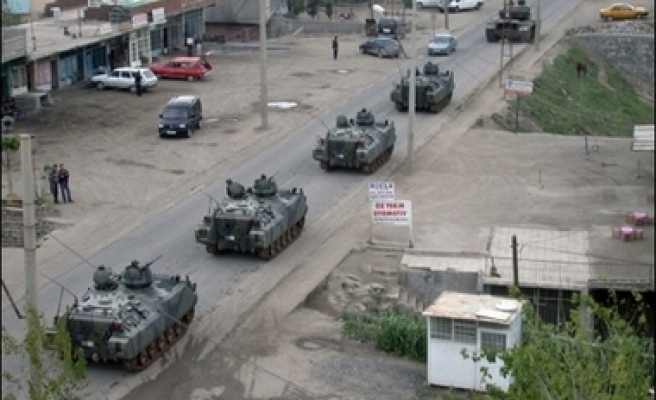 Two senior security officials, speaking on condition of anonymity because they were not authorized to speak to the media, said the raid was limited in scope and that it did not constitute the kind of large incursion that Turkish leaders have been discussing in recent weeks.

"It is not a major offensive and the number of troops is not in the tens of thousands," one of the officials told the AP by telephone. The official is based in southeast Turkey, where the military has been battling PKK since they took up arms in 1984.

The U.S. military said it could not confirm the reports but was "very concerned."

The last major Turkish incursion into northern Iraq was in 1997, when about 50,000 troops were sent to the region.

The officials did not say where the Turkish force was operating in northern Iraq, nor did he say how long they would be there. Both officials are involved in PKK operations, though they did not disclose whether they participated in the planning of the operation on Wednesday.

An official at military headquarters in Ankara declined to confirm or deny the report that Turkish troops had entered Iraq.


Turkish authorities rarely acknowledge such military operations, which were more frequent before the U.S.-led invasion of Iraq in 2003.

The Turkish military said rebels across the border in Iraq opened fire Wednesday on a Turkish military outpost in the province of Hakkari, which borders both Iraq and Iran. It said there were no casualties.

Turkey has been building up its military forces on the Iraqi border recently, amid debate among political and military leaders about whether to attack separatist rebels of the PKK, or Kurdistan Workers' Party. The rebels stage raids in southeast Turkey after crossing over from hideouts in Iraq.

"We can't confirm a thing at this time, but we are looking into it and obviously we are very concerned," said Lt. Col. Christopher Garver, a military spokesman in Baghdad.

Iraqi Foreign Minister Hoshyar Zebari said the government has not seen any major operations along the border.

"There has been intermittent shelling, for instance, attacks, certain violations, minor violations on the border which we have documented and reported back to the Turkish side, but honestly we haven't seen any major operations along the border," Zebari told The Associated Press in a telephone interview.

"We are aware of this Turkish troops buildup on the border and the Iraqi government position has been that we will not accept or tolerate any military incursion into Iraqi territories," he said.

"We have urged all sides, including the Kurdish leadership, to ease tension and to seek dialogue to resolve all outstanding issues because we believe any military incursion into the northern provinces would only lead to further escalations and instability and this is in nobody's interests, not in Iraq's, nor the United States, nor Turkey," he added. "We are in contact with the Turkish officials and we have friendly, good relations with the Turkish government."

During major incursions in the 1990s, fighting occurred on a front stretching more than 100 miles, mostly in rugged terrain where communications were difficult and the Turkish Kurds were already entrenched in the mountains.

But Reuters reported Turkey's Foreign Ministry and military General Staff on Wednesday denied a Web site report that 50,000 Turkish troops had crossed into northern Iraq to crush PKK hiding there.

"This report is not true," a Foreign Ministry source told Reuters.

A General Staff official described the report as "disinformation."