An Arab summit failed on Sunday to clinch a breakthrough on Lebanon. 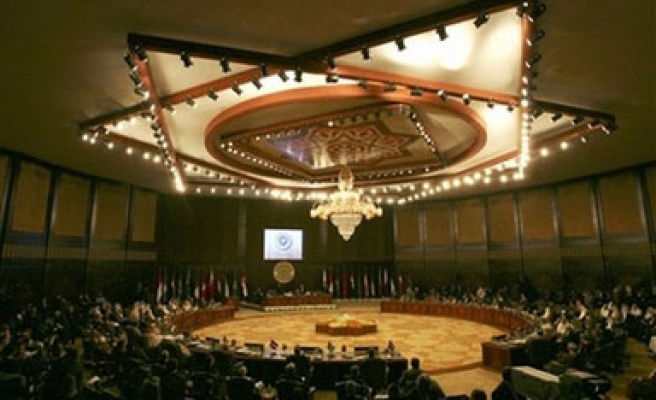 A Damascus Declaration -- which Arab League chief Amr Mussa read out at the end of the two-day summit -- called on Lebanon to elect a consensus president and re-endorsed an Arab initiative for peace with Israel.

They also urged Iraq "to disband all militias without exception... and speed up the building and training of the Iraqi armed and security forces... in preparation for the withdrawal of foreign troops from Iraq."

The leaders called on Arab states to bolster their diplomatic respresentation in Iraq by opening up embassies in the war-torn country.

On Lebanon, "Arab leaders stress their commitment to the Arab initiative to solve the Lebanese crisis, and call on Lebanese leaders to elect consensus candidate General Michel Sleiman at the time agreed," in the final resolutions.

They also called in their resolutions for the strained ties between Lebanon and its former powerbroker Syria to be put on the right path.

Feuding Lebanese politicians should "decide on the basis for forming a national unity cabinet", in line with an Arab League initiative to end Lebanon's worst political crisis since the end of a 1975-1990 civil war.

Half the leaders of the 22-member Arab League, including the heads of state of heavyweights Saudi Arabia and Egypt as well as Jordan, boycotted the Damascus summit, blaming Syria for Lebanon's crisis.

Washington had pressed its allies to think twice before attending the summit, accusing Syria of blocking Lebanon's presidential election.

But Syrian President Bashar al-Assad denied charges of meddling in Lebanon in his opening address on Saturday.

"It is the contrary which is true because pressure has been exerted on Syria for over a year to interfere in Lebanon's affairs" but Damascus has refused, he said. "They have their nation, their institutions, their constitution."

Lebanon has been without a president since November.

The rival factions have agreed in principle to elect army chief Sleiman as the next president, in line with the Arab initiative, but have been feuding over the formation of a new government.

A parliamentary session to elect a new president has been set for April 22, after 17 previous postponements.

Arab leaders at their boycott-hit meeting in the Syrian capital also renewed an offer to normalise ties with Israel if the Jewish state withdrew from the occupied Arab lands.

The summit "stressed its insistence on maintaining the Arab initiative for peace which represents the main launchpad for resolving the different aspects of the Arab-Israeli conflict," according to the final resolutions.

The Saudi-inspired initiative for peace with Israel was first launched at a Beirut summit in 2002 and reactivated in Riyadh last year.

The summit highlighted the increasing polarisation between Syria and US allies such as Egypt and Saudi Arabia.

Saudi Foreign Minister Prince Saud al-Faisal on Saturday called on Syria to make a "positive move" to break the deadlock in Lebanon and "complement the intense efforts exerted by Saudi Arabia and a number of Arab countries".

Egyptian President Hosni Mubarak, in a message, said the Arab world "had hoped that prior to the summit a long-awaited settlement to the crisis... would be reached".

Syria, hosting an Arab summit for the first time, trumpeted the absence of US allies as a triumph over Washington's influence.

"They (the United States) did their best to prevent the summit but they failed," Syrian Foreign Minister Walid Muallem told reporters. "Their aim is to divide the Arab world."

The leaders agreed on Doha as the venue for their 2009 summit.