Archeologists have found in a mass grave in Peru what they think could be the remains of the first fatal victim of a gunshot in the Americas. 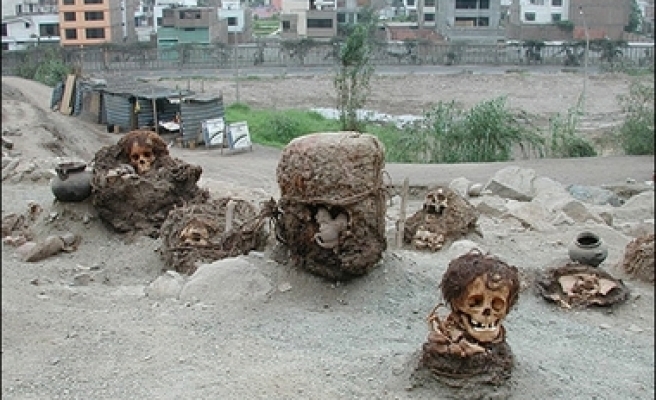 Archeologists have found in a mass grave in Peru what they think could be the remains of the first fatal victim of a gunshot in the Americas.

The skull of the victim, a sixteenth century Incan, shows a hole the size of a musket ball. Suspicions that it was caused by a shot were confirmed by forensic experts in the United States, who found traces of metal around the hole.

The finding of the 500-year-old skull pierced by a bullet was presented at a conference in April but has not yet been published in a specialist journal, National Geographic - main sponsor of the excavations - said Tuesday.

The report said that a team of investigators led by the Peruvian Guillermo Cock found a mass grave with a total of 72 skeletons in the town of Puruchuco, not far from Lima.

Bioarcheologist Melissa Scott Murphy, from Bryn Mawr College near Philadelphia, Pennslvania, who participated in the investigation, told the daily Philadelphia Inquirer that the remaining victims had apparently been beaten or stabbed to death.

US historian Blair Turner, from the Virginia Military Institute, linked the finding with the conquest of Peru by Spaniard Francisco Pizarro, 1532-1533. A few years earlier, another Spaniard, Hernan Cortes, had already used firearms in the invasion of Mexico, Turner told the newspaper.

Indeed, Cock did not rule out that Incas or other indigenous peoples in the Americas had been shot dead by Europeans at an earlier date. However, he noted that as far as his team knows the Inca warrior found in Puruchuco was the first known gunshot victim in the New World.