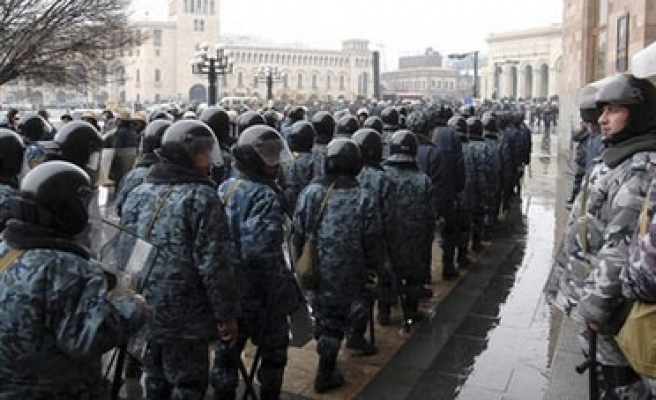 Armenian riot police used truncheons to break up an opposition protest in the capital Yerevan on Saturday, witnesses said.

Several thousand opposition supporters had been protesting daily since a Feb. 19 presidential election was won by Prime Minister Serzh Sarksyan. The opposition said the vote was rigged to deny them victory.

A Reuters correspondent in Freedom Square, scene of the protests, said it was now surrounded by several hundred riot police who were blocking access.

A spokesman for Levon Ter-Petrosyan, the opposition leader who had been leading the protests, said riot police moved in at 7.30 a.m. (0330 GMT) on Saturday when some protesters were holding an overnight vigil in the square.

"They came, they beat people up and they removed everyone," said Arman Musinyan.

A police spokesman said he was unable to make any immediate comment.

A man near the square, who did not want to give his name, said he had been with the protesters when the police arrived. The man's finger was broken.

"We were asleep. They came and they started to beat us up. They had truncheons," he said.

Authorities said earlier their patience was running out with the protests. Sarksyan and his close ally, the outgoing President Robert Kocharian, said the opposition was abusing its right to protest and hampering normal life in the city.

Observers from the Organisation for Security and Cooperation in Europe said the Feb. 19 election broadly met Armenia's commitments on democracy, though there were some flaws.