Iranian FM Mottaki will wisit Turkey after Syria, Thursday evening on the third leg of his three-nation tour. 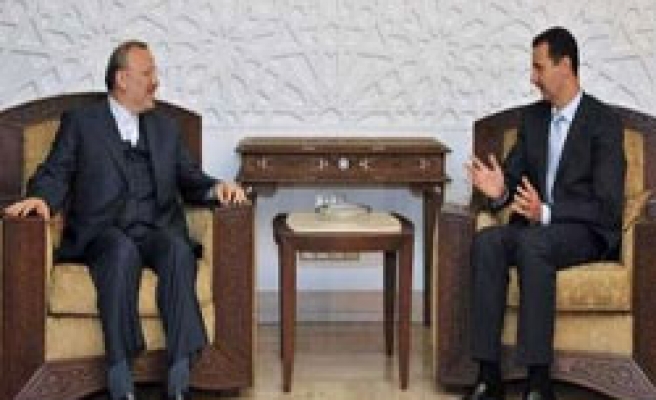 In a meeting with Iranian Foreign Minister, Manouchehr Mottaki, in Damascus on Thursday, Assad stressed that open communication with Iran would be constructive for the current regional situation.

Iranian Irna news agency said the president added that Europe attaches great importance to the two countries' role in the region; the remark came after he took a trip to France and met with President Nicolas Sarkozy in Paris last week.

"I told the French official that keeping cordial ties with Iran and Syria would help the EU to play a constructive role in the region," Assad said.

The Iranian foreign minister responded by saying that the two allied countries have a great role in the peace process in Lebanon.

The top diplomat added that his country backs the return of the Golan Heights to Syria, saying resistance against the Zionist regime will benefit Syrians.

Israel occupied the Golan Heights in 1967 and has since refused to heed Syrian and international demands to withdraw.

During his visit to Damascus, Mottaki is expected to discuss the security and stability of the Middle East region and the impact of international developments on the relations between the two countries.

Mottaki and his accompanying delegation, who arrived here on a day-long visit, were warmly welcomed by Syrian Foreign Minister Walid al-Moallem.

During his stay, Mottaki is to meet President Bashar al-Assad, Vice-President Farouq al-Shara and his counterpart.

Mottaki arrived in Damascus from Muscat, Oman, where he reviewed issues of mutual interest with senior Omani officials.

The Iranian foreign minister is to proceed to Turkey Thursday evening on the third leg of his three-nation tour.

The agenda of the next foreign ministerial meeting of the Non-Aligned Movement (NAM) is among the topics of discussion of Mottaki and the officials of the three countries.