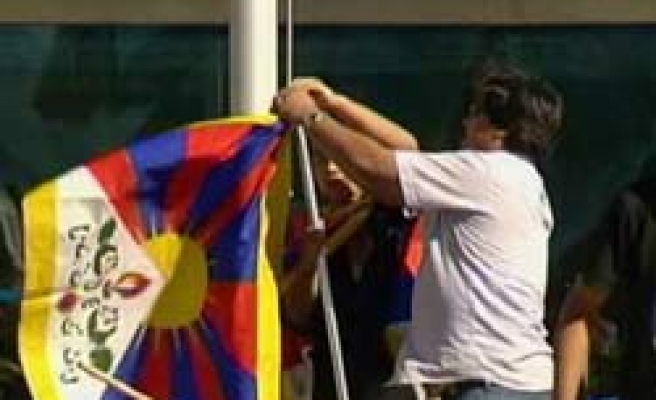 The rioters would be treated leniently if they turned themselves in by midnight on Monday, and unspecified rewards and protection would be given to anyone providing information on the violence, said a joint notice from the high court, police and state prosecutors in the Tibet Autonomous Region.

State media quoted the notice as saying the protests against Chinese rule in Lhasa, the regional capital, since Monday were a "political conspiracy" by supporters of the exiled Dalai Lama, the highest leader of Tibetan Buddhism.

State television on Saturday broadcast its first footage of the rioting, showing burning buildings and vehicles, and groups of protesters breaking into shops apparently unchallenged by police.

A MOSQUE BURNT DOWN

"The outbreak of violence died down in Lhasa Friday night, after a tumultuous day that saw windows smashed, shops robbed, a mosque burnt down and reportedly many casualties," the government's official Xinhua news agency said.

It quoted officials as saying that at least 10 "innocent civilians," including two hotel employees and two shop owners, had died in some of the 60 fires recorded in the city on Friday,

"The number of injured and other losses kept rising" and "many policemen on duty were badly injured," it said without elaborating.

Paramilitary police rescued some 580 people, including three Japanese tourists, from banks, supermarkets, schools and hospitals that were set alight, it said.

US-based Radio Free Asia on Saturday quoted Tibetans in Lhasa as saying up to 80 people could have died in the rioting.

"There could be about 80 dead, or more, but there is too much commotion here to give an exact number," the broadcaster quoted one Tibetan witness as saying.

Youths attacked police and businesses run by non-Tibetans during the rioting, the broadcaster said.

BUILDINGS OWNED BY CHINESE AND MUSLIM IMMIGRANTS SET ON FIRE

"All those shops owned by Chinese were ransacked and burned. Tibetan shop owners were told to mark their shops with scarves," he said.

Many Muslims from the Hui ethnic group have migrated to Tibet from neighbouring provinces in recent decades, as well as hundreds of thousands of Han Chinese, drawing resentment from many Tibetans.

Radio Free Asia on Friday reported that police had "fired into the crowds" of rioters, but the government on Saturday denied the charge.

"We fired no gunshots," Xinhua quoted Qiangba Puncog, chairman of the regional government, as saying in Beijing on Saturday.

'POLİCE ORDERED NOT TO USE FORCE'

The agency quoted officials as saying the police were "ordered not to use force against the attackers".

"But they were forced to use a limited amount of tear gas and fired warning shots to disperse the desperate crowds," it said.

Qiangba Puncog said the government would "severely deal with those who engage themselves in activities of splitting the nation" by fighting for independence for Tibet.

Friday's rioting followed protests by Tibetan monks that began Monday, the 49th anniversary of an uprising against Chinese rule that was crushed by troops.

The protests have since spread to several other monasteries in other Tibetan areas of China.