More than 200 people were arrested across US on Wednesday as protesters are marking the fifth anniversary of the U.S. occupation of Iraq. 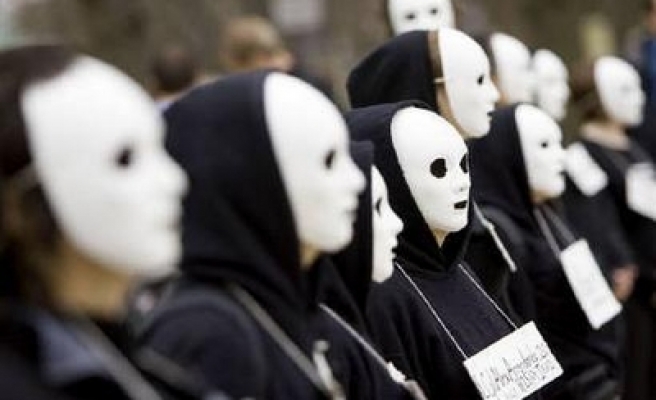 There were 32 arrests in Washington after demonstrators attempted to block entrances to the Internal Revenue Service, while 30 others were arrested outside a congressional office building, police said.

Protesters had hoped to shut down the IRS, the U.S. tax collection agency, to highlight the cost of the war. Police cleared the building's entrances within an hour.

In San Francisco, long a center of anti-Iraq war sentiment, police arrested more than 100 people who protested through the day along Market Street in the central business district, a spokesman said.

On Washington's National Mall, about 100 protesters carried signs that read: "The Endlessness Justifies the Meaninglessness" and waved upside-down U.S. flags, a traditional sign of distress.

One hour after the IRS standoff, several dozen protesters waved signs that read: "Stop Paying to Kill" and "How Much Longer?" as a ragtag brass band played. IRS employees were easily able to enter the building.

"We wanted to put our bodies between the money and what that money goes to fund -- the war, the occupation, the bombs," said Frida Berrigan, an organizer with the War Resisters League.

The war has cost the United States $500 billion since the invasion began in March 2003 and is a major issue in November's U.S. presidential election. Tens of thousands of Iraqis have been killed and millions more displaced, with almost 4,000 U.S. soldiers killed.

Later, scores of noisy protesters blocked a busy intersection in Washington's business district. They picketed in front of the offices of The Washington Post and threw red paint on the building that houses the Examiner newspaper and Bechtel National Inc, which has handled major reconstruction projects in Iraq.

In New York, about 30 members of the "Granny Peace Brigade" gathered in Times Square, knitting in hand, to demand troops be brought home now.

"We're out here to show people that this war is madness. We never should have gotten into this war in the first place," said Shirley Weiner, 80.

Police in Boston arrested five people who blocked access to a military recruitment center by lying on a sidewalk dressed as slain Iraqi civilians, an Iraqi mourner, a slain U.S. soldier and an American citizen in mourning.

"We went to this military recruiting station today because we want to see the war end immediately," said activist Joe Previtera in a statement. "Silently waiting for Congress to act on this war in 2009 will condemn thousands more people to injury and senseless death. Enough is enough."