Astronauts of the US shuttle Atlantis prepared for the first space walk of their mission Monday, to begin installing power-generating equipment on the outpost hundreds of miles above the Earth. 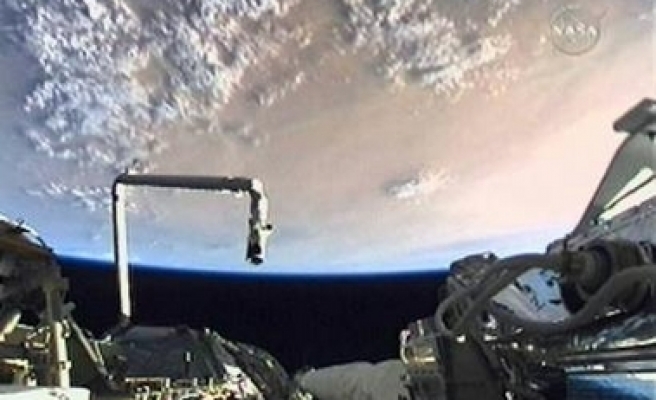 Astronauts of the US shuttle Atlantis prepared for the first space walk of their mission Monday, to begin installing power-generating equipment on the outpost hundreds of miles above the Earth.

Two of the crew, mission specialists John “Danny” Olivas and Jim Reilly were spending the night in an airlock on the station in preparation for the six and a half hour space walk set for 1:53 pm (1753 GMT), the space agency NASA said.

Monday’s job is install a new 16-tonne truss segment containing solar panels, to be attached with the help of the station’s giant robotic arm.

The shuttle docked with the International Space Station Sunday, after performing a dramatic backward somersault in space.

The space station (ISS) crew rang a bell as shuttle astronauts came aboard through opened airlocks connecting the vessels and all shook hands and talked. The arrival was captured in images broadcast by the US space agency NASA.

Shuttle commander Rick Sturckow brought the shuttle to a rest after a nearly 48-hour voyage from Earth, some 350 kilometers (217 miles) away.

Before docking, Atlantis turned slowly over for station crew to photograph insulation on its underside, the space agency said in a statement.

A delicate parking manoeuvre followed, as Sturckow slowed the 100-tonne shuttle to a mere three meters (10 feet) per second and steered it into dock at 3:36 pm (1936 GMT).

The digital photographs of Atlantis’ underbelly were to be transmitted to Texas and examined to make certain that its heat-protective exterior is in good shape for its return to Earth.

The shuttle, on its first mission of the year, suffered a four-inch (10 centimeter) tear on a thermal blanket and small pieces of foam broke off from its external fuel tanks after it blasted off from the Kennedy Space Center in Florida Friday.

Lift-off damage is a concern after the February 2003 shuttle disaster. The Columbia craft disintegrated as it returned to Earth due to breaks in its heat shield caused by foam insulation peeling off its fuel tank and striking a wing during the launch.

All seven astronauts aboard perished and the shuttle program was put on hold for nearly two and a half years while the US space agency sought to overcome the problem, modifying the external fuel tank and setting procedures to check the heat shield while in orbit.

NASA has played down concerns over the damage to Atlantis. One of the mission’s directors, John Shannon, said the damage was in a spot not exposed to the highest heat as the shuttle breaks through Earth’s atmosphere.

Atlantis’ 11-day mission STS-117 is the first since hail damage to the spacecraft in a freak storm forced NASA to scrap a March lift-off.

When unfolded, the new solar arrays will provide additional power to the station in preparation for the arrival of new science modules from the European and Japanese space agencies.

At least two other space walks are planned on Wednesday and Friday, to continue installing the equipment. Another space walk could be made if any repairs are deemed necessary to the damaged heat shields.

“They’ve got plenty of time to figure out what to do about it or not do about it before they land,” NASA spokesman James Hartsfield, told CNN news.

The ISS is a key stepping stone for preparing manned missions to Mars. NASA plans at least 13 more shuttle missions to finish the 100-billion-dollar station by 2010, when the agency retires its three-shuttle fleet.

The Atlantis mission is led by Sturckow, 45, a Marine colonel, who was joined in the cockpit by co-pilot Lee Archambault, 46, an air force colonel.

The seventh passenger, Clayton Anderson, 48, will serve a four-month mission aboard the ISS. He switched places Sunday with flight engineer Sunita Williams, who has been there since December. She will return to Earth on board Atlantis. Last Mod: 11 Haziran 2007, 19:06
Add Comment