Nasa will try to bring US space shuttle Atlantis and seven astronauts home on Friday after clouds and rain at its Florida landing site prevented a scheduled touchdown on Thursday. 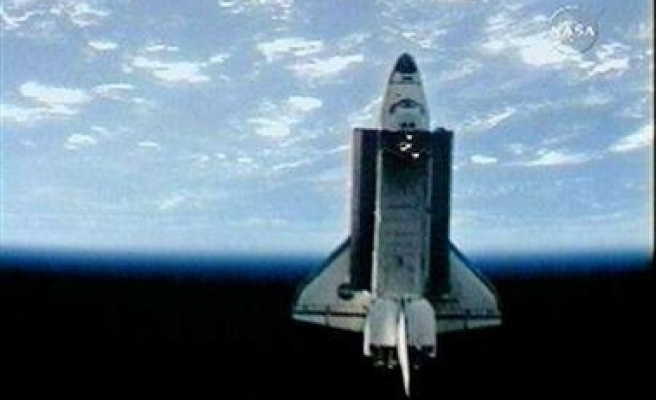 Nasa will try to bring US space shuttle Atlantis and seven astronauts home on Friday after clouds and rain at its Florida landing site prevented a scheduled touchdown on Thursday.

The shuttle has been in orbit for 13 days to install solar power panels on the International Space Station and prepare it for new European and Japanese laboratories.

Flight directors had two opportunities to land the shuttle on Thursday, but thick clouds covered the vicinity of the Kennedy Space Centre in Florida and thunderstorms threatened.

The shuttle has enough fuel and supplies to stay in space until Sunday, but it cannot land in rain because it could damage the thousands of ceramic tiles that protect the spaceship's belly from the fiery heat of re-entry.

Flight directors told Atlantis commander Frederick Sturckow to lower the shuttle's orbit to add an extra landing opportunity on Friday at the backup runway at Edwards Air Force Base in California, should poor weather continue to dog Florida.

The first possible touchdown at Kennedy Space Center on Friday will be at 2:18 pm EDT (18:18 GMT) and a second at 3:54 pm, although flight directors could decide to divert Atlantis to California, with a possible landing occurring there at 3:49 pm EDT.

Additional California landing opportunities are at 5:24 pm and 6:59 pm.

But weather conditions at both sites are questionable, with more rain and clouds in store for Kennedy Space Centre and high winds forecast for the Mojave Desert site.

"We're going to be fighting the same challenges at KSC. At Edwards, the winds are going to pick up," Antonelli said. "We are going to try to land tomorrow," he added.

While NASA battled weather on the ground, its Russian partners in the $100 bn space station programme wrestled with the outpost's computers.

The primary system shut down last week while astronauts were hooking up the station's new solar panels.

Station commander Fyodor Yurchikhin and flight engineer Oleg Kotov were able to bypass suspect circuitry and eventually revive the computers, which are needed to keep the station properly positioned in orbit.

The station crew disconnected two of the three computer systems on Thursday from the jumper cables used to bypass the circuits but failed to restart the network.