The future of the African Union will come under scrutiny only five years after its creation at a summit this weekend where some heads of state will launch a push for a closer federation across the continent. 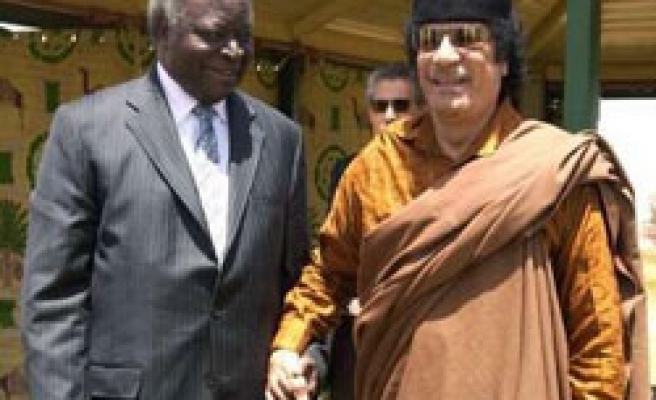 The future of the African Union will come under scrutiny only five years after its creation at a summit this weekend where some heads of state will launch a push for a closer federation across the continent.

The three-day meeting will take place in Accra, the capital of Ghana whose founding president Kwame Nkrumah was the first African leader to argue the continent could only exercise real clout by clubbing together.

Now after the African Union’s failure to bring peace to the continent’s major trouble spots Darfur and Somalia, leaders such as host President John Kufuor and Libya’s Moamer Gaddafi will again hammer home the message that only a so-called United States of Africa can deliver results.

The agenda of the three-day summit has been almost entirely devoted to discussion of the prospects for greater union in a tacit admission that the AU, which was formally established in 2002 from the embers of the old Organisation of African Unity (OAU), is failing to deliver.

However leaders and their top lieutenants from the 53 African nations are also expected to debate their problems in raising a long-promised peacekeeping force for Somalia, which had been one of the key objectives of the last AU summit in Ethiopia, as well as the situation in Darfur.

AU commission head Alpha Oumar Konare told a preparatory meeting of foreign ministers on Thursday that the creation of an alternative USA was the only real way in which to face the myriad problems facing the world’s poorest continent.

“The battle for the United States of Africa is the only one worth fighting for our generation — the only one that can provide the answers to the thousand and one problems faced by the populations of Africa,” said Konare.

Kufuor, elected AU president at January’s summit when Sudan’s ambitions were scuttled by the crisis in Darfur, has echoed Nkrumah by declaring: “Divided we are weak. United, Africa can become one of the world powers for good.”

But leaders of some of the bigger countries on the continent, including the economic powerhouse South Africa, are much cooler.

According to one delegate, South African President Thabo Mbeki told his peers in Addis Ababa that “before you put a roof on a house, you need to build the foundations.”

Mbeki’s Foreign Minister Nkosazana Dlamini-Zuma, speaking before she departed for Accra, said “no one disputes the need for a United Africa in whatever form” but it was a question of how such a goal could best be achieved.

The AU’s inability to persuade anyone but Uganda to send troops to patrol the streets of Mogadishu has been widely seen as a blow to its credibility.

Its 7,000 troops which are currently on duty in Sudan’s Darfur region have also found themselves overwhelmed and are desperate for their numbers to be beefed up by UN blue helmets in spite of opposition from Khartoum.

The union, which came into being in July 2002, was meant to have demonstrated a resolve that its predecessor notably lacked.

Gaddafi however believes that the AU in its current form is doomed to failure as well.

“The OAU, the council of African ministers failed, the African parliament is a rump parliament,” he said on a visit to Guinea earlier this month.

“These instruments must be created in Accra, the voice of the people must be heard at last.”

Katumanga Mutambai, a lecturer at the University of Nairobi, said he was unconvinced that enough leaders would actively push for greater union even if they made the right noises.

“I think on the issue of continental union, there will be lots of wishful thinking but without the political will for a push towards its realisation,” he told AFP.

“Most African leaders are inclined towards regime consolidation and therefore disinclined to larger unions whereby they become small fish in a big pool.”