African Union peacekeeping troops have patrolled Mogadishu for the first time since they arrived in the Somali capital in March. 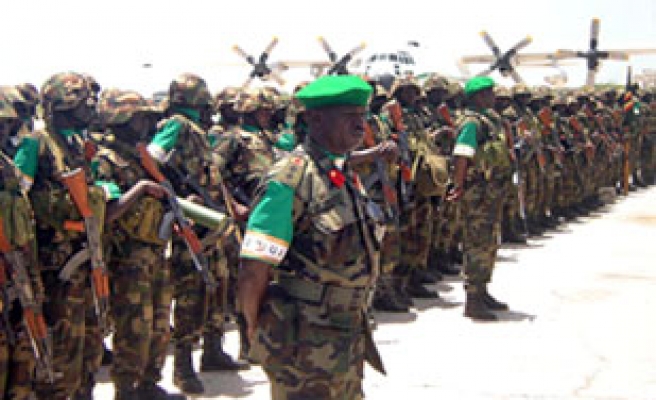 African Union peacekeeping troops have patrolled Mogadishu for the first time since they arrived in the Somali capital in March.

Their deployment onto the city's streets on Tuesday came after the government said it had defeated armed rebels in several weeks of heavy fighting that killed at least 1,300 people and sparked a massive refugee exodus.

Ugandan troops in a convoy of 30 armoured vehicles and trucks rolled through the clash-hit areas of northern Mogadishu in what they described as an effort to boost local confidence in them.

The AU troops are supposed to take over security from Ethiopian troops now backing the interim government.

The United Nations Security Council on Monday ordered the world body to draw up contingency plans to deploy UN peacekeepers to take over from the AU force, a prospect many view as unlikely unless Somalia becomes more stable.

The presence of soldiers from mainly Christian Ethiopia - the traditional rival of pre-dominantly Muslim Somalia - has inflamed the recent clashes and given insurgents fighting the government a means to rally the Somali people.

The government on Saturday declared victory and began sweeping strongholds for weapons, fighters and looters. And a handful of residents are returning since the guns have fallen silent.

Somali leaders in exile in Eritrea however have said that their fighters from the Islamic Union of Courts, the main rebel movement, have just fallen back to regroup and change their tactics.

The government is also holding talks with Mogadishu's dominant Hawiye clan, which funded the Islamic Courts Union' brief rule of Mogadishu and its environs before their defeat by Ethiopia and the government in a late December war.

Many Hawiye believe President Abdullahi Yusuf is using the government to favour his own Darod clan, evoking fears that he may punish the Hawiye as dictator Mohamed Siad Barre, also a Darod, did until his 1991 ouster ushered in an era of anarchy.

The government, established in 2004, is trying to restore central rule to the Horn of Africa country for the first time since ouster of Siad Barre, the former Somali president. Thirteen previous attempts have failed. Last Mod: 02 Mayıs 2007, 10:21
Add Comment