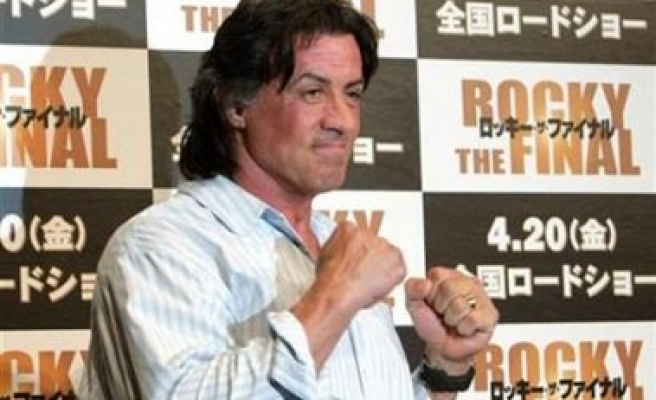 The 60-year-old star of the blockbuster "Rocky" boxing movies had faced a maximum fine of 22,000 dollars, but the magistrate ordered him to pay just 13 percent of that figure because the actor had shown remorse.

But Deputy Chief Magistrate Paul Cloran also ordered Stallone, who was not in the Sydney court where he was sentenced, to pay the prosecution costs of 10,000 dollars, taking his total bill to just under 13,000 dollars.

Stallone last week apologised to the court for bringing 52 vials of a banned human growth hormone and testosterone, a male hormone used to improve muscle mass, into Australia when he came here to promote his latest Rocky movie.

The one-time "Italian Stallion" said he had been taking the substances under medical supervision for years to treat a medical condition, which was not revealed in court, and did not know they were illegal.

But the magistrate said Stallone had failed to prove he had a valid prescription for the human growth hormone, Jintropin, which was found in his luggage at Sydney airport.

Jintropin is not legally available for retail use in the United States and therefore could not have been prescribed, the magistrate said, also referring to an interview the actor had with Australian customs officers.

During that encounter, Stallone told officers that as one got older, the pituitary gland slowed, making one feel older.

"This stuff gives your body a boost and you feel and look good," Stallone said. "Doing Rambo is hard work and I am going to be in Burma (Myanmar) for a while. Where do you think I am going to get this stuff in Burma?"

Human growth hormone occurs naturally but can also be made in synthetic form to boost muscle mass.

Stallone last week pleaded guilty to importing the banned growth hormone, but said in a written statement he had made a "terrible mistake."

"Never ever was it my intention to breach the laws and I realise that I should have properly informed myself about your customs," Stallone said.

His lawyer said Stallone, who shot to global fame in the 1976 movie "Rocky," had been ignorant of Australian law and was "extremely mortified" over the incident that overshadowed the launch of his latest film here.

But prosecutor John Agius told the court that the Hollywood icon had tried to "cover up" the fact that he had not declared four vials of testosterone by throwing them out of his hotel window as police arrived to search his room.

Cloran said while Stallone had tried to deceive customs officers about the hormone, he had shown contrition.

"Mr Stallone made an error of judgment and he has now done all he can to remedy the situation," he said.

"Just because people get older doesn't mean they abandon their dream or their ability to want to do something, so Rocky is symbolic of still wanting to participate," Stallone told reporters recently.