A planned cull of thousands of near-starving kangaroos in Australia’s capital on Monday had animal rights activists warning of protests to save the animals. 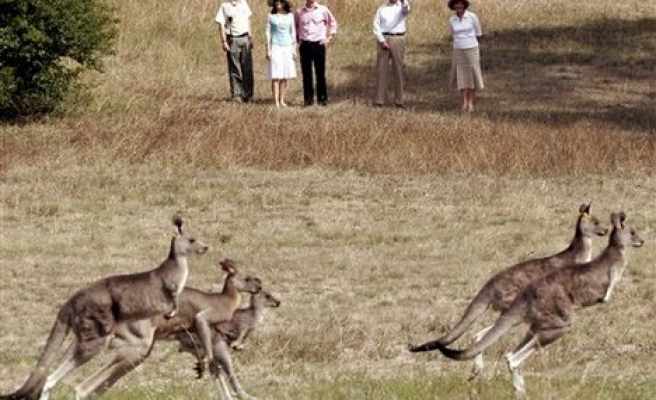 A planned cull of thousands of near-starving kangaroos in Australia’s capital on Monday had animal rights activists warning of protests to save the animals.

Australia’s Defence Department plans to employ professional hunters to shoot around 3,200 eastern grey kangaroos -- around half the 6,500 population -- on two military bases on the fringes of Canberra, including a firing range.

‘It is a very cruel, violent way to treat animals, on a par to just treating them as if they were weeds to be mown or pulled out,’ Animal Liberation president Mary Hayes told local radio.

The defence department, in a letter to Canberra’s city government, said the kangaroos were causing serious erosion due to over-grazing in the drought-ravaged area, endangering a species of local lizard and the threatened gold sun moth.

Kangaroos have moved from the fringe of Canberra into the city centre amid a 10-year drought, grazing on school sports ovals and parklands kept green with regular watering.

The defence department said the problem at Canberra’s Majura military training area and the Belconnen Naval Transmission Station was so severe it could not wait for an experimental project to sterilise the marsupials using drug-laced food baits.

The carcasses of the kangaroos culled in the planned three-day shoot were to be buried in a pit on government land.

‘A powerful rifle shot to the cranium results in one of the most humane deaths administered by humans to any wild or farmed vertebrate animals in the world,’ local government officials wrote in the Canberra Times newspaper.

The city’s acting environment minister John Hargreaves said a licence for shooting had not yet been granted, with a final decision due this week.

‘If they go ahead with it, they are going to be sorry. We will do whatever it takes to stop this,’ National Kangaroo Protection Coalition spokesman Pat O’Brien said.