Armenian forces occupied the Nagorno-Karabakh region, internationally recognised as part of Azerbaijan, in the 1990s. 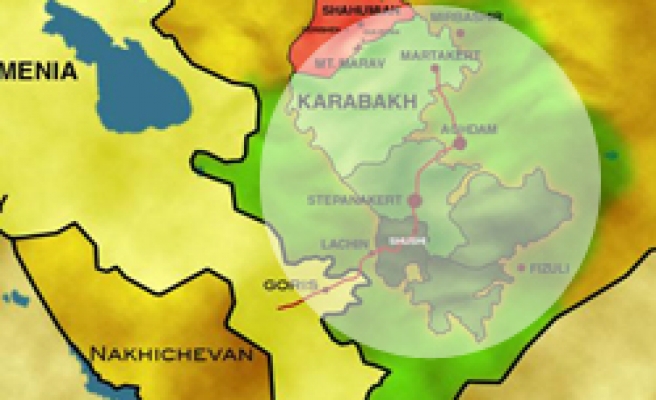 Azerbaijan staged its first military parade in 16 years on Thursday.

Armenian forces occupied the Nagorno-Karabakh region, internationally recognised as part of Azerbaijan, in the 1990s. Azerbaijan says it reserves the right to restore its control by force if peace talks fail.

Azerbaijan exports about 700,000 barrels of oil a day to world markets, most of it via a pipeline operated by a BP-led international consortium.

Attack helicopters, bombers and fighter jets later flew in formation past the building on the shores of the Caspian Sea, in a parade that lasted over an hour.

Much of the equipment on show was Soviet-designed but there was also Western gear and troops were fitted out in NATO-style uniforms -- part of a modernisation of the armed forces funded with a ten-fold rise in defence spending since 2003.

"The international community is worried by our policy in this area and places the emphasis on this," Aliyev, who succeeded his father as president in a 2003 election, said in a speech at the parade.

"But Azerbaijan continues to live in a state of war and is trying to resolve the Karabakh issue," he said. "We are continuing negotiations with Armenia, but they have been going on for a very long time and the people are tired of them. They cannot go on for ever."

The war over Nagorno-Karabakh killed about 35,000 people and forced over a million to leave their homes. Many of them are still living as refugees.

Though a fragile ceasefire is in force, the two sides have never signed a peace deal to formally end the war, and their armies are locked in a tense stand-off. Soldiers are frequently killed in skirmishes.

Talks mediated by envoys from France, Russia and the United States have failed to produce a peace agreement.

Aliyev said at the parade Azerbaijan's annual defence spending was now $2 billion. He said the increase was in line with an overall growth in state spending in Azerbaijan, which has one of the world's fastest-growing economies.