Opinion polls cited by the government suggest Aliyev, 46, who succeeded his long-ruling father Heydar in 2003, will win about 70 percent of the vote and secure another five-year term. 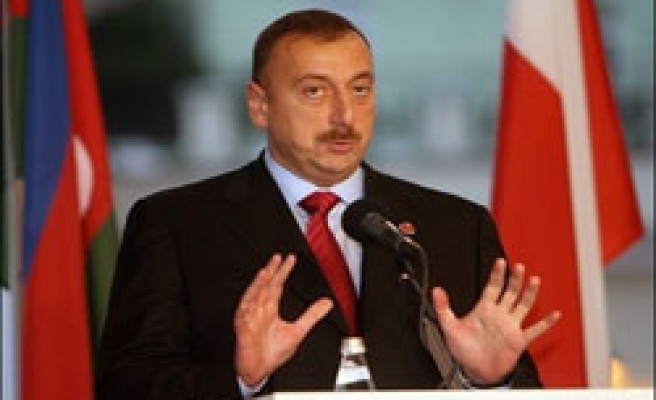 Unusually in a country where the election campaign has yet to start, the opposition doesn't dispute that it will lose October's presidential election by a mile. In fact it may not even take part at all.

Opinion polls cited by the government suggest Aliyev, 46, who succeeded his long-ruling father Heydar in 2003, will win about 70 percent of the vote and secure another five-year term.

Where the government and the opposition differ is on the reasons for Aliyev's expected victory.

"It can be summed up in one word: work, work, work," said Aliyev's chief political adviser Ali Hasanov in an interview.

"Since his first day in office, the president has worked tirelessly to eliminate poverty, unemployment and social problems. He has fulfilled or exceeded all campaign pledges."

Fuelled by an oil boom, Azerbaijan's economic growth is indeed striking. The country was one of the fastest-growing in the world last year, with GDP soaring 25 percent.

Cranes line the skyline of the bustling capital Baku, Mercedes and BMWs fill the streets and shops selling top brand luxury goods are sprouting around town.

But the country's opposition says Aliyev's virtually guaranteed election success owes less to his skill as a leader and more to a harsh crackdown on democracy and media freedom.

"Every election here has been falsified," said Ali Kerimli, leader of the Popular Front opposition party and a member of the main opposition bloc.

"All the percentages the parties get are set by decree from the presidential administration...It's a election like the ones held in the Soviet Union -- fiction."

Kerimli said his party, along with other opposition groups, would boycott the October poll unless the government agreed to five conditions including the release of political prisoners, the right to hold meetings freely, the complete renewal of the election commission and the right to media freedom.

But Aliyev himself has pledged on numerous occasions that Azerbaijan will pursue a democratic future.

"I think in 15 years of independence Azerbaijan has gained very big successes in the field of democratic development," he said in an interview with a Japanese paper in June last year.

"We have transferred from a totalitarian system to an open one. There are all political freedoms, institutions, political parties, freedom of press, opinion and speech here."

Adversaries of the government say their experience has been different.

Azer Akhundov, director of the opposition newspaper Azadlyq, blames official harassment for a decline in his newspaper's circulation from 200,000 when it began in 1989 to 7,000 now.

"All mass media in Azerbaijan are under the control of the Aliyev family," he said in an interview.

The government dismisses that charge and brushes off as "baseless" OSCE criticism of media freedom and election standards.

"We didn't become members of the OSCE so they could push us around like the politburo in Moscow used to in Soviet times," Hasanov said.

Some opposition politicians and journalists complain that, far from pushing Azerbaijan around, the West is muting its criticism because it fears losing a key strategic ally and access to its rich oil reserves.

Azerbaijan lies at a strategic crossroads between East and West, bordering Iran and Russia and straddles a region emerging as an major transit route for oil and gas from Central Asia to Europe. Home to a key Russian radar base, it has pursued closer ties to NATO and sent troops to help the U.S. war in Iraq.

With so much at stake, diplomats in Baku choose their words very carefully.

"The coming election provides an opportunity for Azerbaijan to lend substance to the commitments it has made (on democracy)" one senior Western envoy said, speaking off the record.

Shahin Hajiyev, editor of the opposition news agency Turan, puts it another way.

"The regime in Azerbaijan suits Russia and the West, so why would they want to change it ?", he said. "The question of who holds power in Azerbaijan is not decided by elections."