Azmi Bishara: I have been targeted

Israeli police say Azmi Bishara, who resigned from Israel's parliament on Sunday, aided enemies of the country during last year's war against Hezbollah. 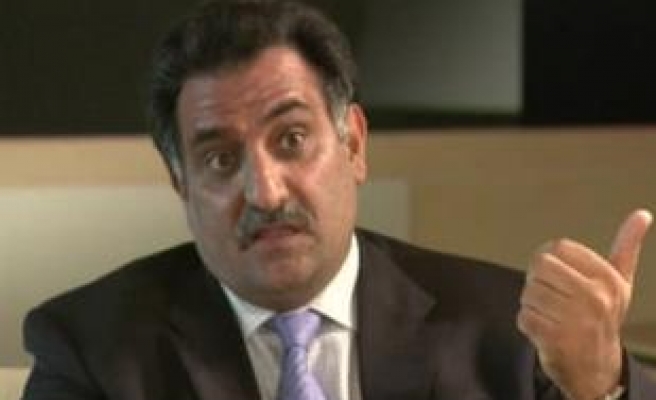 Bishara, who heads the anti-Zionist party Balad, has denied any wrongdoing, telling Al Jazeera he did not have direct contact with the Lebanese fighters.

A police document, released after a court partially lifted a gag order on Wednesday, said Bishara, 50, is suspected of aiding the enemy in wartime through information he conveyed, violating money-laundering laws and committing other security-related crimes.

The document did not specifically mention Hezbollah nor elaborate on the allegations. No charges have been brought in the case.

Bishara resigned from the Knesset on Sunday at the Israeli embassy in Cairo and said he would stay abroad for a time because of a "racist" climate back home.

A police source said Bishara could be arrested immediately if he returned to Israel. He lost his immunity to criminal prosecution when he quit the legislature.

Bashira has called for a fair and impartial state for all Israeli citizens, describing it as unrealistic and prejudiced for Israel to be both Jewish and democratic.

This has led to accusations that he is trying to destroy the Jewish character of Israel.

Here is a full transcript of his interview with Jane Dutton in Qatar on Talk to Al Jazeera.

Al Jazeera: You are being investigated by Israeli police for unpublished charges. You have been in this situation before. Do you think that, being an Arab member of the Knesset, you are being targeted?

Bishara: Well, yes, I have been targeted. It is a reality now because, in the last few years, I was two times brought to court and this is the third investigation.

The first two times had to do with my political opinions. Once because I was not recognising the Jewish character of the state and calling for a state of its citizens.

The second time was for visiting an enemy country. They consider Syria and Lebanon as enemy countries. I was charged with that.

Actually we do not accept that the enemies of Israel are our enemies as Arabs and Palestinians. We think we are part of the Arab world too and not only citizens of the state of Israel.

This is the third time. We can see the first two charges were once probably constitutional charges or normal felonies and I was stripped of my immunity, but I was not guilty because the court did not accept the Israeli charges.

It seems for me it has to succeed in Israel because the charge is about security. Something has to do with our connections to journalists and friends in the Arab world, as if passing the information to the enemy at a time of war, which is a very serious charge but had to do with what we think as normal for our relations with the Arab world.

Israel wants to use this as a tool in order to get rid of this position in Israel which calls for Israel to be the state of its citizens and accepting the national character of the Arabs in the country.

How do you balance your interests? You say that Syria and Lebanon, particularly Hezbollah, are not your enemy, but they are enemies of the Israeli state?

The Israeli state was established in 1948 on the ruins of the Palestinian people. Now if you want, in the language which will be known probably in Australia or America or even in South Africa, we are indigenous people, the natives of the place.

And Israel was built on our ruins. We did not immigrate to Israel in order to become Israelis like many French people would like the Algerians to integrate into France or to accept as equal citizens.

But these people immigrated to France and they chose to be French. We did not choose to be Israelis. Israel came to Palestine, destroyed Palestine and emerged from the ruins of Palestine.

Our Israeli citizenship was forced upon us. Now we use it as a framework for work to demand for equality. But this does not amount to identification with the goals of the country in the region, which we do not accept. We are not Zionists and we do not consider Syria and Lebanon our enemies, on the contrary.

So you are advocating the destruction of Israel?

Of course not. We do not identify with everything that other organisations demand.

We live in the state of Israel and in the framework of such a regime and we think that Israel should be accepted if it accepts a just peace, which means a just settlement with the Palestinians to co-exist in justice and equality.

But we do not accept a kind of apartheid reality with the West Bank and Gaza and third- or fourth-class citizenship for the Arabs in Israel. We also do not accept Israel to be the policeman of the region. In that sense, yes we do identify, for example, with the victims of Israel, the West Bank and Gaza as victims of the occupation, Lebanon as a victim of Israeli aggression and we do not conceal this.

We think that Israel turned the border incident into a full-scale war. It was an aggression against Lebanon which destroyed about a third of the country. And we also say that war crimes were committed. We said that as Palestinians, and actually we can say that as parliamentarians.

It is our duty to speak out against Israeli aggression. In addition to this, I think what is cultural and what is historical and what people do not understand is the fact that historically we cannot identify with the Zionist project. It is a Zionist project which is built on our ruins.

How do you find your working with other Israelis on the Knesset?

The Knesset is not the worst political culture in Israel. The street could be even more racist than the parliament. But in the parliament, I think Israel is democratic within the limits of being a Jewish state.

I would call it trivial democracy. It is a democracy for Jews, and Arabs are granted rights because they are a minority and because they can be endured.

What is amazing or what would be amazing for Westerners who think that Israel is the only democracy in the Middle East, is the media. It is totalitarian actually. There is one orchestrated incitement calling for ousting us etc, while in the Arab media there are different opinions.

What options are open to the Arabs there? What do Arab Israelis want?

Normal people, of course, are not professional politicians and they don't think of ideologies etc. Most Arabs, even people who do not support us politically, think that Arabs should be acknowledged to run their own affairs as a national minority like other national minorities. And that the state should be the state of all its citizens, Because as long as it is a Zionist stae, it cannot grant equality for its citizens.


The majority of the Arabs, I think, do believe that. But of course there are different interests, like any other minority. Some of the Arabs are connected to the state apparatus, some work in the state and are afraid to say their opinions. Some have even connections with Zionist parties.

So we have different opinions, but I think that the majority of the people agree to this platform and I think this is driving a lot of people in Israel crazy. What we started is now actually becoming commonplace.

You said that the Arabs are persecuted in Israel. Give us a sense if you will of the conditions in which they live?

First of all, not all Arabs are persecuted. If you are a loyal Arab or a good Arab as many Zionists would say, you are not persecuted of course. It depends on what the definition of a good Arab.

What makes a good Arab?

Accepting to be marginalised, accepting to be a second-class citizen and being pleased and thankful because you live better than in Gaza. You have to be grateful.

Anyway, many times when we talk like this, they would say you should be pleased that we allow you to talk, in Syria you cannot talk. We would say, well, you took the whole country and you give us the freedom of speech.

Give us back the country and you take your freedom of speech if you want. And at the end Syria will be democratic, Egypt will be democratic. I know that democracy will win in the Arab world in the end. But these are their countries which you took.

How do the bad Arabs live then?


So, people like us, who come with this approach that our rights are derived from being natives, not from Zionism, or not a favour done for us that we have to be grateful for, then, you know, you start being a bad Arab.

So then you become a bad Arab and then they try to persecute you. One charge after another, and if they fail, they seem they are ready to carry on and charge you with treason because you do not identify with the state or because you have connections with the Arab world, which is the principal issue for us because we are Arabs.

It could be. If Israel does not grab now and does not jump on the opportunity of the current Arab peace initiative, I think, they are going into catastrophe. Because at the end what will impose itself is the fact that this is an apartheid country. And the two state solution will fail because people will live in inequality and in the end people will not accept to be second-class citizens.

Most Arabs in Israel live in discrimination in all walks of life.

Many internal refugees, Arabs in Israel who live five kilometres from their villages, were driven away and cannot go back to their properties.

There is no demographic question here, if they go back to their villages the number of Arabs won't be bigger. They are already citizens.

Sometimes things are happening to Arabs in Israel because the state ignores them. There is a phenomenon called unrecognised villages. Villages that should not be there, although they were there before the state of Israel emerged. So it is a severe case of discrimination. That's why, I think, Israel is making a huge mistake if it is not taking the peace initiative which is suggested by the Arab world.

What do you think of the significance of the timing in this investigation?

I think media interest has one timing and the interest of the security apparatus has a totally different timing. The media interest in blowing it all at once probably has to do with the failure of the war against Lebanon. They are looking for a scapegoat. I think this is a mechanism that we know in cases of, let me call it, problematic minorities at times of war.

Jews were like this once in Europe and were treated like that sometimes. In our case, we are speaking about minority Arabs in a country at war with Arabs.

So it is very easy to speak about a scapegoat to blame at times of war, especially when they fail in war and they failed in the war.

It also has to do with the distribution of our ideas in Israeli society, especially at the time of the discussions of the Israeli constitution.

A lot of papers were recently published by Arab institutions which adopted our ideas. They say that the source of the problem is the fact that a group, or Azmi Bishara, or someone else, published their ideas freely and speak about the state of the citizens etc althought they are in the parliament.