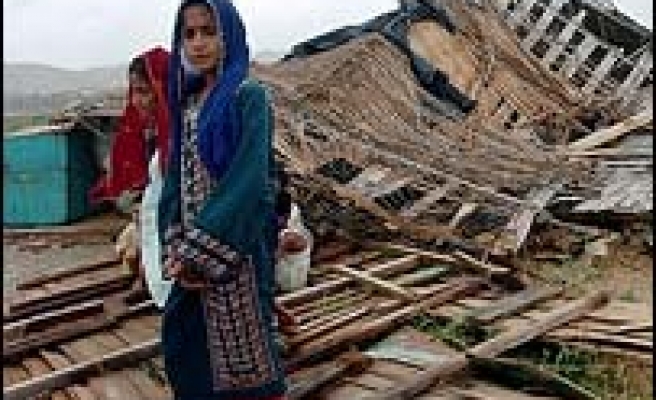 Many people are clinging to trees and rooftops to escape floods and are now cut off by rising water. Roads, bridges and phone links are hit in many places.

Relief officials say dozens of villages are under water and some 20,000 homes have been destroyed or damaged.

In neighbouring Afghanistan, more than 100 people have died in the floods.

Hundreds of people have been killed in rain and floods in South Asia in recent days, more than 200 of them in Pakistan's biggest city, Karachi.

Army and navy helicopters have managed to drop some relief aid to flood victims in Pakistan's Balochistan province, but the military say many rescue flights have been frustrated by the elements.

A government aircraft flew over coastal areas on Thursday and spotted people trapped on the roof of a mosque in Turbat, headquarters of Kech district which has been badly hit.

Thousands of people in the coastal areas of Ormara, Pasni, Gwadar and Jiwani lost their homes after cyclone Yemyin struck the Balochistan coast, west of Karachi, on Tuesday.
Many people in low-lying areas were evacuated to higher ground ahead of the cyclone.

Reports say at least 20 people have been killed since Tuesday, although officials are confirming only two deaths.

Hundreds of motorists were stranded on the coastal highway which links southern Balochistan with the rest of Pakistan. Parts of the road were washed away by the cyclone.

Pakistan's navy says it has airlifted food and emergency supplies to the motorists. Elsewhere, people say they have yet to see any help.

"We are hungry, we are thirsty, the authorities say they are sending helicopters but we have not seen any," Hamal Baloch, a resident of Kech, told AFP news agency.

At least one small dam near the town of Pasni burst on Tuesday, inundating dozens of villages.
The floods are also threatening the Mirani dam in Kech district, reports say. One unconfirmed report said water from the dam had overflowed into the area and drowned 12 people.

"The situation is out of our hands, it's out of control. The entire town has been inundated and people have taken refuge in tall buildings and trees," the mayor of Kech, Rauf Rind, told Reuters news agency.

A senior Afghan official, Abdul Matin Edrak, told the BBC that the majority of deaths had been reported from Ruukha district in northern Panjshir province.

Some 500 of 2,500 people stranded in the flood-affected province of Kunar had been rescued by helicopters, officials said.