Bangladesh have culled more than 200,000 chickens at different farms over the last two weeks over suspected bird flu outbreaks, although the disease had begun subsiding across the country. 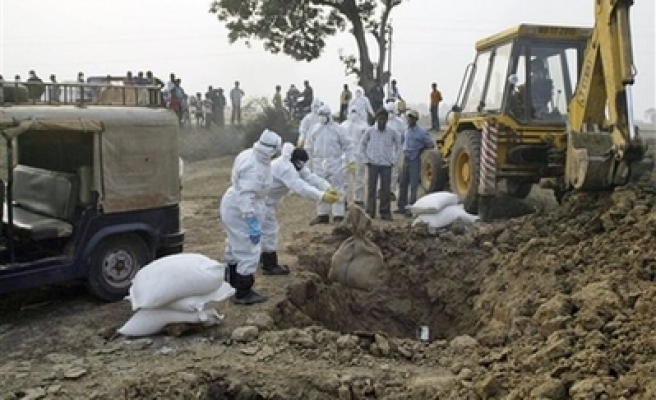 Authorities in Bangladesh said on Monday they have culled more than 200,000 chickens at different farms over the last two weeks over suspected bird flu outbreaks, although the disease had begun subsiding across the country.

Avian influenza has spread through 47 of Bangladesh's 64 districts and forced the killing of more than 1.5 million birds since March of last year. Nearly 2 million eggs have also been destroyed.

"More than 200,000 chickens and ducks were culled over the past two weeks in dozens of affected firms and in their immediate vicinity," a senior official at the livestock ministry said.

Industry officials said bird flu has caused losses of about 45 billion taka ($650 million) to the poultry sector, which accounts for 1.6 percent of the poor nation's gross domestic product.

About 60 percent of the country's more than 150,000 poultry farms have been closed, making more than 1.5 million people jobless.

Chicken prices in the capital Dhaka have jumped nearly 75 percent in the past week, selling at 140 taka per kg, while the price of eggs has risen over 10 percent.

"We are facing a quick upward trend in the chicken and egg prices, when prices of rice, flour, edible oil continue to rise alarmingly," said Mashud Islam, a government employee.

Around five million of the country's more than 140 million people are directly or indirectly involved in poultry farming.

No human bird flu cases have been reported in Bangladesh, a densely populated nation where poultry is commonly kept by households.

Experts fear the H5N1 strain could mutate or combine with the highly contagious seasonal influenza virus and spark a pandemic, especially in countries such as Bangladesh where people live in close proximity to backyard poultry.