Bashir has reacted to the ICC move by forming a united front with opposition parties, seeking regional support and insisting he is ready for Darfur peace talks. 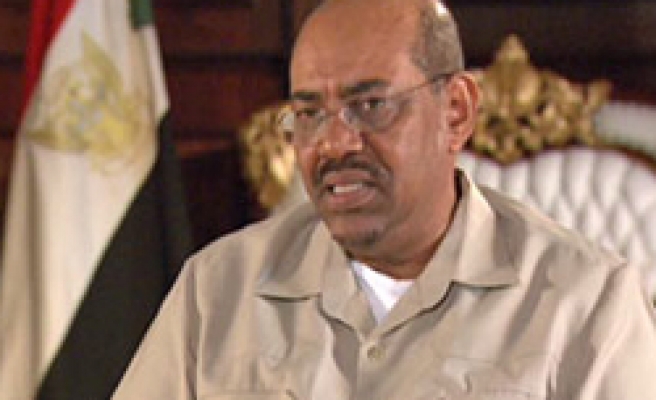 Sudanese President Omar Hassan al-Bashir made his first visit to Darfur on Wednesday since the International Criminal Court prosecutor accused him of genocide and war crimes and sought his arrest.

Dancing to traditional music and chanting Islamic slogans, Bashir addressed thousands of Darfuris in the regional capital el-Fasher, his promises of development and peace drawing cheers from onlookers who surged forward to get closer to him.

"We all know that injustices happened (here)," he said, in a speech broadcast live on state television. "But from day one we have been working to provide stability for all the people of Darfur."

"We want to send this message to the world: we are the people of peace, we want peace ... we are the only ones who can achieve peace in Darfur."

Mostly non-Arab rebels took up arms in the remote western region in early 2003, accusing the government of neglect. To quell the revolt, Khartoum mobilised mostly Arab militias who are accused of atrocities including widespread rape, murder and looting.

Bashir described the prosecutor's request for an ICC arrest warrant for him over Darfur as a foreign conspiracy. "They are trying to confuse us ... They want to send us right back to square one."

"But Ocampo's words will not stop us from our work," he added, referring to ICC Chief Prosecutor Luis Moreno-Ocampo.

Bashir has reacted to the ICC move by forming a united front with opposition parties, seeking regional support and insisting he is ready for Darfur peace talks.

He has pledged to continue implementing a north-south peace deal, and signed a landmark election law hours after the ICC announcement on July 14.

South Sudanese President Salva Kiir, who is also the number two in the national government, urged the ICC on Tuesday to delay issuing a warrant for Bashir.

"We should have time to consult the rest of Africa and the world," Kiir told reporters during a trip to Uganda. "The Sudanese government should be allowed to implement the accord signed with the South Sudan government and to negotiate with the fighting forces in Darfur."

A diplomatic campaign has seen Sudanese officials visiting a dozen countries in the past week to drum up support for the tabling of a U.N. Security Council resolution to suspend any ICC warrant for Bashir for a renewable period of 12 months.

While Sudan has secured Arab and African support, Western nations have been cautious in reacting to the ICC move.

The Arab League said on Tuesday that Sudan had agreed to revive special courts for Darfur to try those suspected of war crimes with Arab and African observers.

The UN says that up to 300,000 people have died and more than 2.2 million have fled their homes since the conflict in Darfur erupted in February 2003. Sudan says 10,000 have been killed.

The war began when African ethnic minority rebels took up arms against the Arab-dominated Khartoum government and state-backed Arab militias, fighting for resources and power in one of the most remote and deprived places on earth.